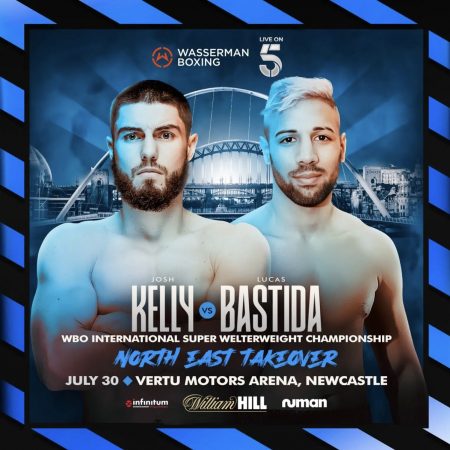 Josh Kelly (11-1-1, 7 KOs) is in confident mood ahead of his WBO International Super Welterweight Championship fight against Lucas Bastida (18-1-1, 10 KOs) on Saturday 30 July at the Vertu Motors Arena in Newcastle, live on Channel 5.

‘PBK’ has his sights set on the top honours boxing has to offer, and knows that a statement win in his home of the North East will trigger the start of his plans to upset the apple-cart amongst the top of the division.

For now, he is living in the present, and his eyes are on the very serious fighter that is Argentina’s Bastida. This will be Bastida’s first fight in this country, and Kelly plans on using home advantage to hit the headlines with an eye-catching performance.

“I’m coming to make noise in the North East first, then after a statement win against a tough opponent like Bastida, I’ll be happy to take on whoever wants it,” said Kelly.

“My skillset is at an elite level. We’ve been sharpening tools for a while now and once I’m crowned the WBO International champion, I’ll be looking at that list of world ranked fighters and targeting whoever I need to face to get to them belts.”

Having gone through grueling preparations for scheduled fights in London and Liverpool, Kelly will at least have home-comforts this time around. A proud Sunderland lad, he does not overlook the chance to have the support of the people in the North East.

“I’ve said it before, that I will never take for granted the opportunity to fight in the North East,” he said. “I can’t wait for fight time now. We’re a week out, everything has gone to plan and I’m looking forward to putting all the preparation into practice.”

Kelly has always been a son of British boxing, who is destined for the top. Momentum continues to build as he soars in an upward trajectory, and he wants to match his potential and ambition with big domestic battles to get fans off their seats.

Should he pass the test of Bastida, there have been plenty of mumblings regarding future opponents that would seriously excite this country’s fans, and admirers from around the globe.

“I’m not going to look past my opponent, but I have full belief in myself that if I bring my A-game, then it’s only going one way,” said Kelly.

“There’s been a lot of noise surrounding potential fights, stadium-worthy fights, and I’ll happily take care of business in front of a packed out arena against anyone.”