Josh Taylor: I Have Nothing But Respect For Ramirez 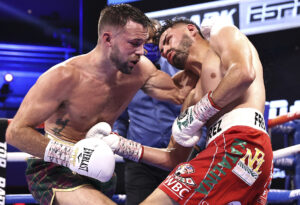 Taylor, 30, also retained his IBF and WBA belts and won the WBC and WBO crowns from Ramirez, 28, of Avenal, California.

The difference was the Tartan tattoo,  involving two knockdowns in the sixth and the seventh, both at close range.  Ramirez walked into the first one, purposefully advancing, to be caught with a jarring straight left counterpunch.  His momentum as much as the punch propelled plus pitched him forward and downward. to the canvass, in his own corner.

The second knockdown involved a technical lapse on the part of Ramirez.  There had been some robust exchanges during clinches and in this one, he dropped his hands as he moved to back away. The mistake was instantly punished with a pinpoint left uppercut, which dropped him much harder.  He again got up and Taylor went to work, but he resisted everything and fought back valiantly.

After the midway point, Ramirez`s right brow was swelling a greyish blue, with his corner soothing it will with the flat iron, to stop it closing. He came back strongly in the ninth, tenth, eleventh and twelfth rounds to narrow the gap, which was always going to be defined by those two visits to the canvass. He`d cut Taylor over the left eye in the fifth with some sharp marksmanship.

With what was at stake, the bout remained tense and heated throughout.  Referee Kenny Bayless briefly stopped the action in the eighth, to tell both to stop being lippy, and cut out the choice as well as ripe, loquacious chit chat, so as to focus their simmering energy on two way exchanges of a more hands on manner.

Judges Tim Cheatham, Dave Moretti and Steve Weisfeld scored their fight 114-112 in favor of the Scot.

“I have nothing but respect for Ramirez. I want to say that everything that happened in the week was not disrespectful. It was all part of the mental game and the fight plan that we had for tonight,” Taylor told ESPN afterwards of his victory.

Gracious, noble and classy, following his first pro defeat, Jose Carlos thanked and waved to his supporters, who cheered him loud and long, as there`s no shame in falling short, when you`ve given your absolute all.  He`ll be back!

Thor Bjornsson & Simon Vallily Clash This Friday In Dubai AIBA Meets R&Js In Dubai, Calls To Be Dedicated To Transparency