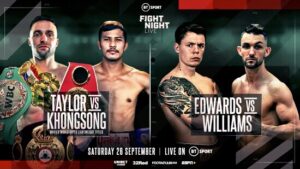 In an interview, Taylor spoke on his defeat to former world amateur champion Domenico Valentino in the amateurs:

“That defeat was daylight robbery,” Taylor said. “A double count back in a Scotland versus England match in the heart of London! Daylight robbery and you’re talking about nearly 10 years ago.

“I won that fight hands down and never got a decision. Amateur boxing was terrible at times, really bad in terms of decision making. It wasn’t the fact I did anything wrong, I thought I boxed really well, it was just the points scoring at the time was terrible. It just made me more determined to succeed.

“All those experiences have just made me more determined to be better.”

“He’s got good timing, he’s got a kind of unorthodox, unrhythmic bounce, he’s good at luring his opponents in on the back of that. He punches through the target and he looks heavy-handed. He’s got the same record as me with one more knockout.

“We’re fully prepared and we’re expecting a tough fight against a guy with good explosive power.”