Josh Taylor: I’ve Trained My Whole Life For This 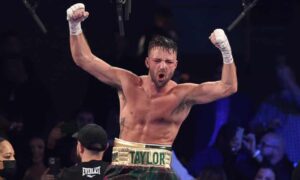 Taylor said: “I’m ecstatic. I’ve trained my whole life for this and dreamt of it so many times over. I’m so happy and over the moon.

“Nothing but love for Ramirez. I meant no disrespect this week. It was just mind games to get him more eager to jump in. We said all week we will use his aggression against him and we got in his head. There is nothing but respect there though, he’s a great champion and an ambassador for the sport.

“The scorecards should have been a bit wider. I wasn’t too happy with the selection of judges but we were still confident of winning the fight. There is a new warrior king on the map and he’s from Scotland!”

Ramirez said: “He took advantage of some of those clinches but, hey, I got back up and tried to give it my best and stay smart,” said Ramirez afterward. “I was never hurt. I was aware. I was just disappointed every time it happened. I tried to shake it off and get back to my rhythm. But it was overall a good fight. Hopefully, I get back and I learn from my mistakes. You win some and you lose some.

“I felt like I landed some clean shots. It came down to the clinches. He would let his hands go as soon as he got his chance and I think I left it to the referee to do his part and it was a lack of experience on my part.”

At the Virgin Hotel in Las Vegas, Josh Taylor had only a small audience. A few occasional flags of his country, Scotland, waved in the blue lights. But no one doubted his determination when it came to fighting José Carlos Ramírez, who got up from two falls and extended the fight to the scorecards. The victory was for Taylor by unanimous decision (114-112 x3), winning the WBA, WBC, IBF, WBO, and The Ring Magazine Super Lightweight belts. From now on, they will call him Undisputed Champion.

It was not an easy fight for any of them. Taylor gained a lot of confidence after knocking Ramírez down back-to-back in chapters six and seven. In the eighth round, Ramírez, of Mexican blood, was trying to find a molecule of hope in the environment, while the European was steadying himself. The two falls were noticeable in the scorecards. In the final part, Ramírez had a brief take-off, but it was obvious that if he didn’t knock out Taylor, it would be very difficult for him to win.

After the first rounds it was clear that both Ramírez and Taylor had a plan to dynamite the other with many blows to the body. And Ramírez’ strategy was to look for Taylor’s chin with left hooks, which came very well. At times the new king stayed on the ropes resisting, while he read intentions and thought of a better plan until the fall on the sixth round came, then the other, and thus the collapse of Ramírez, who sold the defeat dear.

The outlook cannot be better for Taylor now. His legacy has grown greater. He swept his rivals in the World Boxing Super Series and by beating Ramirez there is no other opponent to suit him. He has made history for his country without being a prophet. He remains undefeated in 18 fights, with 13 KOs. A long reign, or his immediate foray at 147 pounds, await for him.