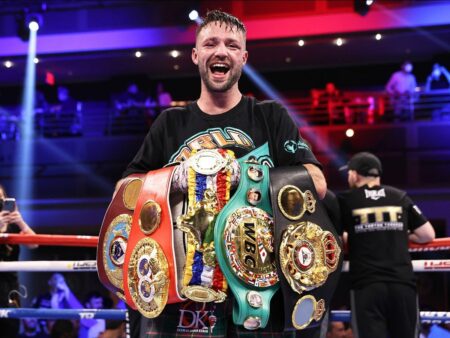 Josh Taylor has already started his training camp and will be one of the attractions of the boxing world in December when he steps into the ring to face Jack Catterall in defense of his World Boxing Association (WBA) Super Lightweight Super Championship and the WBC, IBF and WBO belts.

The undisputed 140 lbs. champion and his English challenger will fight on the 18th of the last month of the year at The SSE Hydro, in Glasgow, Scotland, the monarch’s home.

Taylor comes from a blow of authority in the division last May 22 when he traveled to the United States and clearly defeated Jose Carlos Ramirez to take the four crowns in a unification bout. Since then his career has taken another status and he is one of the best pound-for-pound fighters today.

“The Tartan Tornado” is 30 years old and seems to be in the best moment of his career. He has shown videos and photos of the initial stage of his preparation on his social media and claims to be ready for this new challenge.

Catterall is not a well-known man on a global level but he has earned his chance thanks to the great career he has had. He is 28 years old and is the WBO mandatory challenger, he is undefeated and comes with a lot of ambition to this fight.

Taylor has a record of 18 wins, no losses and 13 knockouts, while Catterall has won 26 fights, 13 of them by knockout.