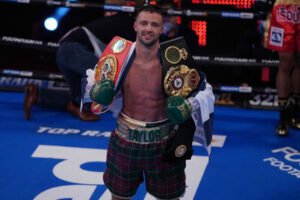 Josh Taylor has been named as the BBBofC Boxer of the Year for 2020 after an incredible period for the unified world champion.

The consideration period for the award was between 1st August 2019 and 31st December 2020, with the Tartan Tornado winning two fights during that time.

Taylor (17-0, 13 KOs) defeated Regis Prograis in the World Boxing Super Series final back in October 2019 to add the WBA super-lightweight title to his IBF belt.

He won the fight by majority decision after a fantastic 12 round battle, with both boxers giving it their all throughout the entire fight.

He then defended the title with a dominant round one stoppage in September, as he knocked out mandatory challenger Apinun Khongsong inside one round.

Taylor said: “Thanks to everyone involved and everyone who voted for me. It’s a privilege to be the winner of this award once again and be amongst the many great fighters and names that are on this list from years gone by.”

Taylor will now turn his attention to his huge undisputed showdown with Jose Ramirez, which takes place in Las Vegas in May.