Josh Warrington: “I Can’t Afford to Slip Up” 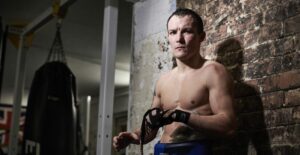 Josh Warrington is all too aware that he can’t afford to slip up against Mexico’s Mauricio Lara at The SSE Arena, Wembley on Saturday February 13 if he is to secure mega fights against the likes on Xu Can and Gary Russell later this year.

‘The Leeds Warrior’ (30-0, 7 KOs) makes his long-awaited return to the ring after a 16 month absence, live on Sky Sports in the UK and on DAZN in the U.S. and more than 200 countries and territories, knowing that a win will pave way to the biggest year of his career to date.

“The next fight is always the most important one,” said Warrington. “You can’t afford to slip up. For my legacy as a fighter, I want to be known as someone who went in there and beat the best. This is the pinnacle of my career. Nobody in the boxing world ever thought I’d get to this stage. All of the big fights are there in front of me. I’m ready to take on the bigger names.

“It’s going to be good to get back. It has been mentally testing. There’s been dates that have changed many times. It’s been last April, then last May, last June, last August, last October and last December. It won’t feel like I’m back until I step through them ropes. It won’t feel like I’m back until that first bell rings. It’s been frustrating but now I’m ready to go.”

WBC Crowned Ali as the “King of Boxing” On This Day: Rafael Orono Became the 1st WBC Super Flyweight Champ