Joshua and Usyk showed their weapons at press conference 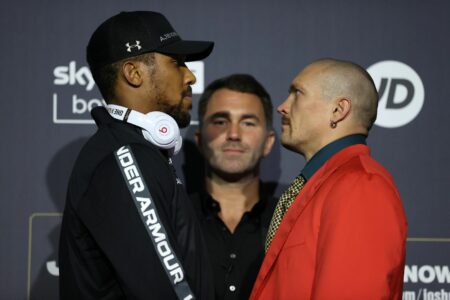 Anthony Joshua and Oleksandr Usyk faced each other in the last press conference prior to their fight for the World Boxing Association (WBA) Super Heavyweight Championship and the IBF and WBO belts.

With only one day to go before they step into the ring at the Tottenham Hotspur Stadium in London, England, the protagonists of the showdown appeared before the press and talked a little about what they expect from this great fight.

It was a contrast in every way. Joshua was serious and sober throughout the event, while Usyk showed the charisma that characterizes him and came dressed as the Joker to send a message that he wants to be the villain on Saturday night and beat the champion at home.

Joshua knows he faces a tough defense against an undefeated and very technical fighter, but he assured that he is made for this type of occasion.

“I like challenges. I beat guys who give me troubles. This fight gives me the motivation,” assured the 31-year-old English champion.

Usyk thinks exactly the same as Joshua in that the fight is very important and for him it will be another way to keep growing in his career.

“Every fight makes history, this will be another step,” stressed the Ukrainian.

Tomorrow they will both step on the scales and Saturday will be the mega fight at Tottenham Stadium.