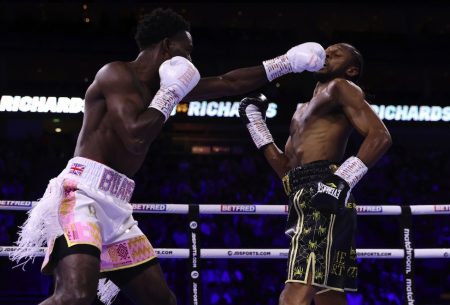 Buatsi knew what he was up against against a veteran like Richards. It would be a tough fight in which his opponent would stand toe to toe and make the night difficult for the 29-year-old fighter.

It was a bout with a lot of exchanges and great moments worthy of a star fight of a big event like the one organized by Matchroom Boxing. Buatsi proved he was up for the challenge and was able to overcome a great opponent.

A left hook from Balski dropped Babic 15 seconds into the first round. But Babic resumed his relentless attack and progressively dominated the stocky Balski.

Late in the ninth, Balski staggered Babic with a punch after the bell. Balski was deducted one point. In the last round, both gave a fierce show to the audience.

Cameron dominated Bustos from the beginning. Even though Victoria had already been world champion in two divisions and faced great fighters like Katie Taylor and Cecelia Braekhus, she was unable to decipher Chantelle’s pervasive style.

The scores were 100-90 on all three judges’ scorecards.

Cameron improved her unbeaten record to 16-0, 8 knockouts, while Bustos dropped to 23-7.

Davies knew he had a tough and courageous opponent in front of him, so he had to push himself to the limit and survive moments of drama throughout the 10 rounds to get the job done.

The 32-year-old veteran won his third fight in a row and made his first defense of the continental belt. He improved his record to 23 wins, 3 losses and 15 knockouts, while Molina’s dropped to 22 wins, 5 setbacks and 9 knockouts.