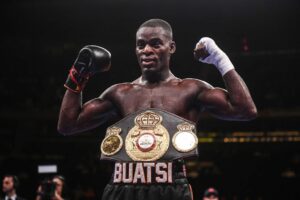 Joshua Buatsi will be the star of the third week of Matchroom Boxing’s Fight Camp. The World Boxing Association (WBA) International Light Heavyweight Champion will defend his belt for the seventh time against Ricards Bolotniks, in Brentwood, on August 14th.

The Briton fighter will face the Latvian in the main fight of the third event scheduled by the British promotions company during its camp. The former Olympic medalist is a native of Ghana but has British citizenship and is one of the great promises of his division.

Buatsi is coming from a knockout victory over Frenchman Daniel Dos Santos on May 15th. With three months of rest, he will return to the ring to maintain the upward path in his career.

Bolotniks is an interesting opponent for several reasons. First of all, he is WBO European Champion, although his title will not be on the line this time; he is also on a seven-fight winning streak, and has not lost a fight in the last three years. On the other hand, and he has knocked out two of his last three opponents.