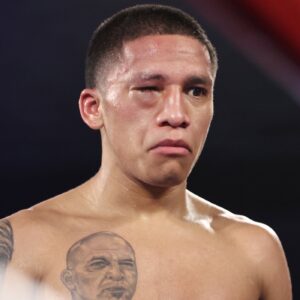 After what many watching considered a judging wrongdoing, Bob Arum of Top Rank maybe putting together a third bout between Joshua Franco and Andrew Moloney. The bout could be headed to Australia.

Confusion erupted on the Las Vegas Crawford vs Brook undercard when the referee’s (and commissions) decision ruled that the Franco-Moloney rematch was declared a no-decision.

Moloney and many supporters believed that Franco’s shut eye was caused by the repeated jabs administered on Joshua’s head and not via an accidental clash of heads. As four rounds had not been completed and after an approximate thirty minute wait, the referee’s decision was upheld after lengthy action replays.

“I’ve honestly had so many messages, thousands of them from people all over the world,” Moloney told the Daily Telegraph. “So I guess that’s the silver lining to being ripped off. With so many people knowing who I am now – and knowing what happened — Bob Arum is already in talks about bringing my title rematch to Australia.

“Right now, Bob still wants the decision overturned. He’s furious. On the night when they didn’t overturn the decision, he told the referee to get out of the ring, called him a bum.

“But who knows what will happen? There’s a chance I’ll have a rematch and, if that happens, Bob wants it to be in Australia. That would be really special.”

Canelo Smith vs Callum Smith December 19th IS ON Tony Bellew: “He Will Be a Heavy Underdog” Callum Smith (vs Canelo)