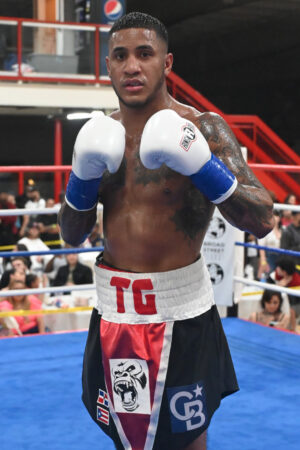 Undefeated Florida-based junior middleweight Josniel “TG” Castro (5-0, 3 KOs) has experienced a long, often difficult trip to get where he is today as he prepares to fight for the fourth time in 2021.

The 24-year-old Castro faces 57-fight veteran Rynell Griffin, of Las Vegas. In the co-featured event on the “Fight Night in Framingham” card, presented by Shearns Boxing Promotions for the benefit of “Fighting Life,” at Sheraton Hotel in Framingham, Massachusetts.

It will mark the first professional boxing show ever held in Framingham, a city incorporated in 1700, located in the MetroWest sub-region of Greater Boston, less than 40 miles from Boston.

High Octane Classics is the presenting sponsor. Other sponsors include Platts Landscaping and Shamrock Sports.

Born in Puerto Rico, Castro moved as a baby to Lawrence and years later he escaped the mean streets there by moving to Maine to focus on his boxing career. During most of his young life, he bounced from one foster family to another, homeless other times, eventually he moved to Florida, where his life dramatically changed when he entered DS Boxing in Boca Raton.

“I was getting into trouble in Lawrence and moved to Maine to get on the right path as an adult.” Castro explained. “I had a lot of personal issues. I then moved and trained for a while in Worcester (MA), where I met Chuck Shearns, who became my adviser and later my manager. I’m not worried about this fight because, at the end of the day, I’ll do what I do. I’m going to continue to work hard and figure things out.”

Castro (TG stands for The Gorilla) understands how fortunate he is to have a strong team in his corner. In addition to Shearns, Team Castro includes head trainer Derik Santos, strength & conditioning coach Phil Daru, nutritionist Jose Rojas, and camp coordinator Maureen Shea.

“The goal is for J to be a boxer-puncher,” Santos commented. “He’s kept busy and that’s credit to Chuck. When he first came in, I liked what I saw, but he’d come into the gym for a few days and then be out. I saw him spar and could tell that he was a kid I could help. He had it! I could see it in his eyes, movements, and reactions. He needed a manager, though, to invest in him I spoke with Chuck and liked him right away. Good managers need to keep their ego in check because they aren’t there every day like a trainer. I’m protecting Chuck’s investment and J’s career. Chuck understands and we’ve been in good sync. We communicate well. I believe in J and the synergy I have with Chuck. Everything is working out well for all of us.” 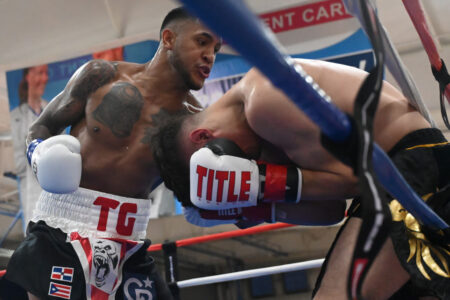 “J deserves to be where he is based on his work, inside and outside of the ring,” Shearns remarked. “My family and I are proud to represent him. He is extremely talented, works hard and most of all loves to learn and get better. Boxing is not known as a team sport, but we have been very fortunate to have put together a true team of professionals. Coach Derik has been a great match for J’s desire and willingness to learn. I could see it right away. Coach Phil and Coach Jose have him doing and learning things he’s never even thought of. Maureen Shea has become a bit of a quarterback for us and I can’t thank her enough. Although we have been busy, coming up on 6 fights in 12 months, it’s still very early in this journey. That said, when you have a person like him, with the tools he has, matched with a team like this. I just say: Watch Us!

No matter how difficult things get in the ring, nothing compares to the obstacles Castro has overcome to become an undefeated prospect. His future is bright, in large part because of the invaluable support he’s receiving from Team Castro members.

Hometown favorite Kevin Lewis will make his professional debut in a 4-rounder against a fellow Framingham resident, super middleweight Saul “The Spider” Almeida (0-14-4), one of the top MMA fighters in New England.

Priced at $75.00 ringside and $60.00 general admission, tickets are available to purchase online at https://www.eventbrite.com/e/fight-night-in-framingham-tickets-171408807357, at UpperKuts gym, or from any of the local fighters on the card. 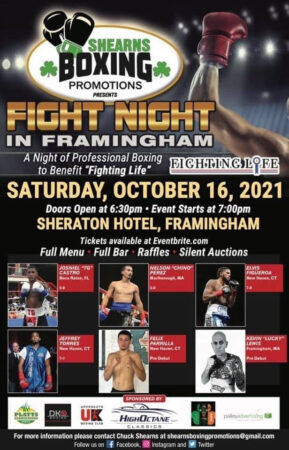