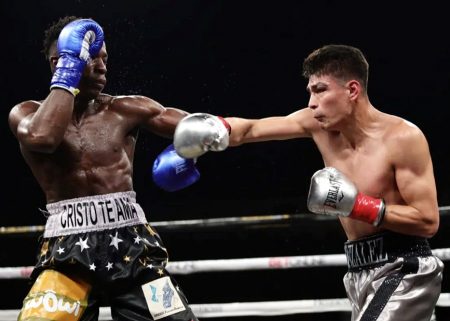 Fantasy Springs Resort Casino brought the heat on Thursday night when SoCal fan-favorite and undefeated fighter Jousce “Tito” Gonzalez (13-0-1, 13 KOs) of Glendora, CA, headlined the fight card in an 8-round super lightweight fight against Jose Angulo (14-3, 7 KOs) of Miami, FL. Gonzalez, performed to a sold-out crowd ending the fight early at the 2:29 marker of the third round.

“I started by feeling him out, I knew he was going to use his distance and stand back, so I just needed to adjust to his style before I began my attack,” said Jousce Gonzalez. “I noticed he liked to back up, jab, and move to the side with his high guard, which is when I decided to make sure and attack his body. I am happy I was able to stop him, no one has done that before. I am ready for the next stage of my career. Golden Boy has a few top fighters at 135lbs and if I have to fight each one, one-by-one, to get to the top, so be it.”

In the co-main event of the night, Coachella’s own Manuel “Gucci Manny” Flores (13-0, 10 KOs), delivered the knockout of the year when he faced Daniel Moncada (15-7-2, 5 KOs) in an 8-round super bantamweight fight. The fight only lasted three rounds, with Flores staying active as he delivered a devastating blow with 1:35 remaining in the third round. Moncada was dropped by the blue corner and required special assistance from the referee to get back on his stool.

“I just want to thank all my Coachella Valley family that came out to support me,” said Manuel Flores. “I know tonight I delivered with an exciting fight and an exciting knockout. I want them to know that I appreciate all of them and I am so happy that I can be here and show them all the hard work I put into this sport. I promise them, I will be the main event next!”

Also, on the card Elnu Abduraimov (10-0, 9 KOs) of Indio, CA kept his undefeated record intact when he knocked out Leonel Moreno (11-1-1 (9 KOs) of Guadalajara, MX at the 1:14 marker of the first round. He was crowned the new IBF North American Junior Lightweight Champion. The fight was originally scheduled to be a 10-round super featherweight bout.

“I am happy I was able to end the fight early,” said Elnu Abduraimov. “I am looking forward to continuing my journey in the division, reach the elite, and fight a world championship. I am grateful to my team for all their support.”

In one of the most anticipated fights of the night, Gabriela Fundora (8-0, 4 KOs) of Coachella, CA, participated in a 6-round flyweight fight against Mexico City’s Lucia Nunez (7-13). The fight did not disappoint the fight fans, as both fighters went after each other looking for an opportunity to hurt the other. Fundora, however, had height and reach advantages and used them to land clear, powerful shots. A few times during the sixth, seventh, and eighth rounds, Fundora overwhelmed Nunez with a flurry of blows but the resilient Nunez was able to resist them all. The fight went the distance with the judge’s ruling in favor of Fundora with scores of 80-72, 80-72, 80-72 giving her an unanimous decision victory.

“I think my jab really made the difference for me tonight,” said Gabriela Fundora. “I was able to use it to land uppercuts that I feel started to wear her down. I want to get to the belts as soon as possible, if staying active is the way to get it, I want to continue fighting at the same pace that I have this year.”

Fan-favorite, Eric Tudor (5-0, 4 KOs) of Fort Lauderdale, FL took on Edgar Valenzuela (7-1, 6 KOs) of Douglas, AZ in a scheduled 6-round middleweight event. The fight started slow with both fighters cautiously taking shots at each other in the first round. However, a clear shot to the body forced Valenzuela to take a knee in the second round. Tudor took advantage of the opportunity and secured a second knockdown which caused the referee to wave off the fight, awarding Tudor another victory via knockout.

“I didn’t expect for the fight to end early, we always train to go the distance,” said Eric Tudor. “When I landed that body shot and he took a knee I knew that it was only a matter of time. I am grateful for all the support this year, from my team, Golden Boy and my fans. I am looking to stay active and maybe add two more fights to my record this year.”

Opening up the DAZN stream, Tampa’s Jasmine “Animal” Artiga (9-0-1, 5 KOs) faced Amy “La Picosita” Salinas (4-2) of Las Cruces, NM, in a 6-round super flyweight event. The exciting bout went the distance as both fighters took turns exchanging blows. Both come forward fighters delivered an entertaining fight for the cheering crowd as the judges ruled in Artiga’s favor with scores of: 60-54, 56-58, and 58-56 for a victory via split decision.

“I feel very excited to have won this fight after only 10 amateur fights,” said Jasmine Artiga. “I feel I had the better game plan and cleaner landing shots. We knew the kind of fighter she was, she is a decorated amateur with a come forward style and I felt we were ready for her. This is a big win for me and a big stepping stone for bigger fighters to come in the future.”

The first fight of the night featured Daniel “Chucky” Barrera (1-0, 1 KO) of Upland, CA, making his professional debut in a 4-round super flyweight fight against Jesus Godinez (3-4, 2 KOs) of Oxnard, CA. Barrera took initiative through the first round as he landed hard shots against Godinez’ body. In the second round, the crowd erupted in cheer when Barrera landed a heavy blow that sent Godinez to the canvas. Godinez kept his distance for the rest of the second round but by the third round a hard right to the face sent him back to the canvas with the referee waving off the fight after Godinez failed to respond to his count.

“I have been waiting to make my professional debut for 10 years,” said Daniel Barrera. “Ever since the amateur days, watching my coach fight professionally was a true inspiration for me. I did feel a little nervous, but once I hit him with the first jab it immediately felt comfortable. I am so happy that I was able to make my professional debut so close to home, in front of all my friends and family. I am so grateful for all their support and promise them more exciting fights!”

The night of boxing streamed live on DAZN and on the Golden Boy Boxing YouTube page and was hosted by Beto Duran and Boxing Hall of Famer Bernard Hopkins.