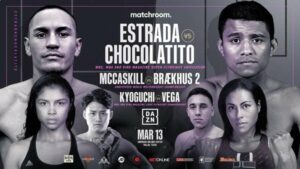 Fight Notes: Scores were 115-113 for Gonzalez, 117-111 Estrada and 115-113 Estrada. The result was a split decision points victory for Estrada that was not popular with the crowd. Boxen247.com had Chocolatito winning the fight. Look for a 3rd fight rubber match!

Fight Notes: Braekhus was deducted a point in round 7 for repeated pushing/holding. Scores were 100-89, 99-90 and 98-91 all for a McCaskill unanimous points victory.

Fight Notes: Vega, seemingly ahead on points, turned around in pain and had to retire with an injury to the hand. Time of the retirement was 1:32 of the 5th round.

Fight Notes: Echeverria was down via a long right hand in round 5 and again via a clash of heads in the same round. Echeverria was down for another time in round 6 and was stopped by the referee later in the round for a Cissokho TKO victory. Time of the stoppage was 1:29 of the 6th round.