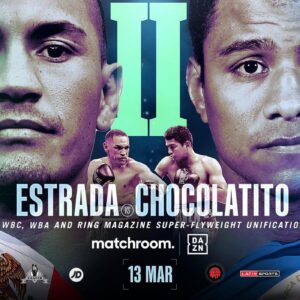 Juan Francisco Estrada and Roman ‘Chocolatito’ Gonzalez will clash in a unification rematch for the WBC, WBA and Ring Magazine World Super-Flyweight titles in a much anticipated rematch on Saturday March 13th.

The bout will be shown live on DAZN in over 200+ countries and territories and presented in association with Zanfer Promotions, Teiken Promotions and Latin Sports.

Estrada and Chocolatito clashed for the first time on November 2012 in Los Angeles, with Chocolatito successfully defending his WBA Light-Flyweight title via unanimous decision, and now over eight years later, they will meet again

Mexican star Estrada (41-3 28 KOs) has established himself as the #1 fighter at 115lbs and underlined his status with a thrilling 11th round KO win over Carlos Cuadras in October in Mexico City, climbing off the canvas in the third round to beat his fellow countryman for the second time in his career.

Former pound for pound #1 Chocolatito (50-2 41 KOs) recorded his own impressive win on the same night by outpointing hungry young Mexican Israel Gonzalez in the first defense of the WBA title that he ripped from Kal Yafai with a clinical KO win in February in Texas.

Estrada and Chocolatito will both have ambitions of becoming undisputed Super-Flyweight champion by the end of 2021, and promoter Eddie Hearn believes that this will be a fight of the year contender that will be staged at a venue to be confirmed soon.

“This is going to be a special fight,” said Hearn. “It’s been a long time coming but both men are in their prime now, with Juan Francisco serving up a dramatic stoppage win in his fight of the year contender with Cuadras and Chocolatito rolling back the years with his clinical KO win over Yafai and looking razor sharp against Gonzalez.

“Estrada is the number one in the division but Chocolatito will be looking to repeat his win – the winner will take a massive step to becoming undisputed and I hope that we’re able to have fans in attendance when we chose the venue to host this must-see fight.

“Estrada vs. Chocolatito is an all-action rematch many years in the making,” said Joseph Markowski, DAZN EVP. “After closing 2020 strong on DAZN, we can’t wait for subscribers to enjoy the terrific schedule we’re building for early 2021 as well.”