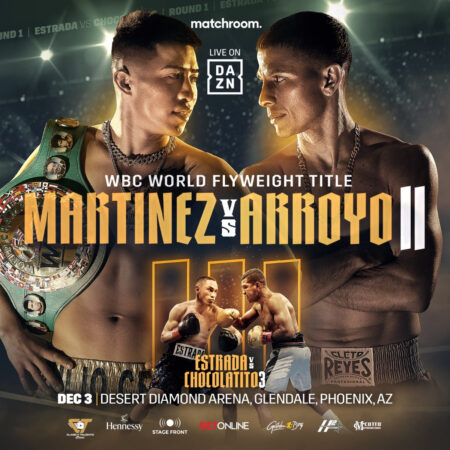 The trilogy clash between Juan Francisco Estrada and Roman ‘Chocolatito’ Gonzalez will take place at the Desert Diamond Arena in Glendale, Arizona on Saturday December 3, live worldwide on DAZN – and Eddie Hearn and Matchroom are delighted to announce that Julio Cesar Martinez will meet McWilliams Arroyo for his WBC World Super-Flyweight title as the co-main event on a blockbuster night of action in Arizona.

Estrada (43-3 28 KOs) and Chocolatito (51-3 41 KOs) will finally go toe-to-toe for the third time in their storied careers, with their last meeting in March 2021 a fight of the year contender that Estrada edged via split decision in Dallas. That victory levelled the score between the pair, after Chocolatito won their first battle back in November 2012 in Los Angeles, and now they will lock horns once again for their third mouth-watering battle a decade on from the first.

Martinez (18-2 14 KOs) and Arroyo (21-4 16 KOs) are also renewing their rivalry on December 3, after their firefight of a first contest in November was sadly cut short after an accidental headclash caused a cut for Arroyo, ending a chaotic three round whirlwind that saw both fighters hit the canvas in the opening session, and Arroyo visit the deck again in the second.

There’s more action to be added to the card soon, and promoter Eddie Hearn believes the final Matchroom show of 2022 in America could be the most explosive yet, with Martinez and Arroyo providing the tastiest of appetizers before the stunning main event.

“What a night this is going to be,” said Hearn. “The trilogy battle between Estrada and Chocolatito is guaranteed to be a thriller, and Martinez and Arroyo have given us a taste of what they provide when they tangle.

“Estrada and Chocolatito will go down as one of the great rivalries in the sport, and on December 3, one of these two modern greats will edge ahead of the other, and that promises to make this the most thrilling of the three clashes – it’s an early Christmas present for fight fans that you do not want to miss.”