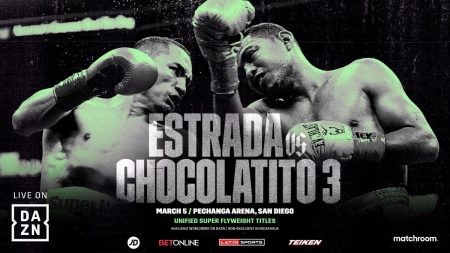 Juan Francisco Estrada and Roman ‘Chocolatito’ Gonzalez will meet in a mouth-watering trilogy fight for the WBA, WBC Franchise and Ring Magazine World Super-Flyweight titles at the Pechanga Arena San Diego in San Diego, California on Saturday March 5, live worldwide on DAZN – and tickets are on sale NOW.

TICKETS STARTING AT $50 (PLUS FEES) ARE ON SALE NOW AT AXS.COM

Estrada and Chocolatito served up a stunning rematch in Dallas in March, with Estrada edging out Chocolatito via split decision in a breathless contest that topped many ‘Fight of the Year’ polls for 2021.

That second clash made it one apiece between two giants of the lighter weights, after Chocolatito claimed victory in their first clash in November 2012, and six months shy of ten years since that night, fight fans will be treated to a third installment of a rivalry that will reach boiling point in San Diego.

Estrada (42-3 28 KOs) will place the WBA, WBC Franchise and Ring Magazine belts on the line, with Chocolatito (50-3 41 KOs) aiming to become a three-time champion at Super-Flyweight – and both stars have lit the blue touch paper for what promises to be an explosive third edition of this epic rivalry.

“This is it this is for all the marbles and to see once and for all who is the best at 115lbs since we are 1-1 in our first two fights,” said Estrada. “We’ve had a couple of date changes, but I’ve made sure to stay active in the gym including during the holidays because I know the importance of this trilogy.

“The first two fights were very close and controversial which is why I will make sure I show up as ready as possible and I hope that Gonzalez does too, so that this time we leave no doubt as to who the best man is, and I can’t wait to show everybody that I am the better fighter.  The first two were wars and this one will be no different which is why people shouldn’t miss it, it will be another guaranteed war.”

“I want to thank God first and foremost, my family, team as well as Matchroom and Teiken for this incredible opportunity,” said Chocolatito. “I also want to thank the WBC, WBA, and The Ring Magazine for the titles that are at stake. I believe the winners will be the fans as a great battle will be held March 5 in God’s name.”

“This is simply must-watch action for any fight fan on March 5,” said promoter Eddie Hearn. “Their second fight last year was the best fight I have ever seen live, and I have no doubt that this is going to be a spectacular third installment to put this up there with the great trilogies of this sport.

“I am so happy to be taking this fight to San Diego and this is going to be one of the hottest tickets in boxing this year, as everybody knows these two men always deliver excitement. We are all in for a treat on March 5, and that date cannot come around quick enough.