Juan Francisco “Gallo” Estrada is the WBA Boxer of the Month 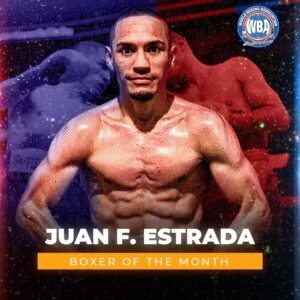 Juan Francisco Estrada was named Boxer of the Month by the World Boxing Association (WBA) thanks to his victory last March 13th against Roman Gonzalez to win the Super Flyweight Super Championship of the pioneer organization.

The WBA released its ranking for the month of March and in addition to the award to Estrada, it also gave an Honorable Mention to Japanese Hiroto Kyoguchi.

The Mexican had a war with the Nicaraguan at the American Airlines Center in Dallas, Texas, and won a split decision in which he also retained his WBC belt.

The fight is already a candidate for fight of the year. The punch exchanges were the order of the day and Estrada was able to withstand the onslaught of Gonzalez to get the win.

“Gallo” settled a score with “Chocolatito” after losing to him 9 years ago. He was able to get his rematch and now the trilogy is expected to be completed this year for the delight of boxing fans.

For his part, Kyoguchi defeated Mexican Axel Aragon Vega at the same event in Dallas and retained his WBA Light Flyweight Super Championship for the third time. The Japanese made his debut in the United States and managed to get the victory after his challenger suffered a hand injury and withdrew from the fight in the fifth round.

Kyoguchi remained undefeated in 15 fights, with 10 KOs, and is one of the strongest names at 108 pounds.

The WBA rankings for the month of March can be consulted in the corresponding section of the WBA’s official website.