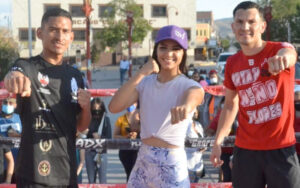 Juárez and Fernández have already got to know each other in the ring. They clashed on November 4, 2017. “Little Lulu” won by split decision, in a superbly competitive 10-round thriller.

“We are very happy. The training camp was successfully done in Juárez. If we win, it`s a team effort. It’s for the wonderful and loyal people of Ciudad Juárez,” said Fernández, following an open training session where she showed what she`s made of.

The card that is promoted by Promociones del Pueblo in association with BXSTRS Promotions. It will be broadcast by ESPN Knockout in Latin America.