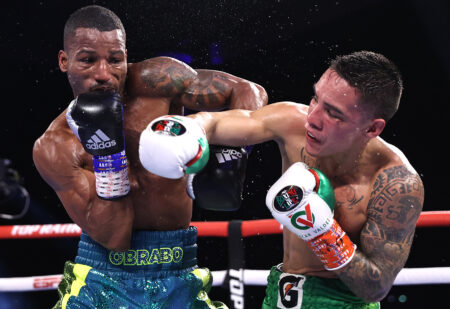 My name is Stephen Blea and this is an open letter which I have decided to write with regards to my scoring from last Friday night in the Valdez vs Conceicao fight in Tucson, Arizona, 10 Sept. 21.

I have been involved in boxing as a ring official both in amateur and professional field for more than 30 years. I have officiated over 60 championship title fights as a judge & referee in several countries of the world including Japan, Thailand, Korea, China, Russia, Mexico and the USA . I have Judged over 200 fights and Refereed over 500 Pro fights, with no controversy.

I have watched the fight and thoroughly analyzed it, the 117-110 score is not accurate and does not represent the actions in the ring and I feel I have let down my federation the NABF, my organization The WBC and most importantly our sport and the fighters inside the ring.

I would like to share my thoughts publicly on the specific conclusions I have reached important topics regarding judging in boxing:

Close rounds – There were a few very close rounds in this fight and I made two mistakes , 1) not to score 10-10 in 2 rounds I felt there was not a clear winner, 2) scoring those to the champion giving him the benefit in the close actions.

Crowd noise influence – It was a loud crowd in favor of Valdez , during the first rounds of the fight some actions took place in a corner in which I had limited view and couldn’t see some punches land by Conseicao and there was no crowd reaction, contrary to when Valdez landed . I was also dealing with photographer’s and camera men all crammed up due to the location of the Champion Valdez in the red corner to the left of me. (I was between the photographer’s on the left of me and camera crew to the right who at times bumped me and blocked and even stepped on my hands while going across the ring apron towards the Champs corner ) Considering these distractions I honestly thought I would be able to do my Job 100%, no excuses.

Getting Stuck on one fighter – I awarded 3 out of the first 4 rounds to Valdez , which is a combination of the above points I have outlined.

I have decided to reach out to my NABF / WBC ring officials committee to undergo a thorough training and review program and will not accept any championship assignments until I complete this process .

I am an honorable man with profound love, knowledge and respect  to the sport, I am sorry for having a bad night and having brought unnecessary controversy to such a sensational fight.