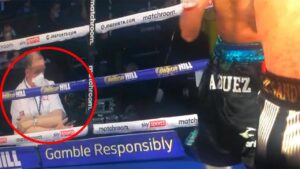 UPDATE: STATEMENT FROM THE BRITISH BOXING BOARD OF CONTROL

“Mr. O’Connor will appear before the Stewards of the British Boxing Board of Control following his appointment to the boxing tournament at the East of England Showground Arena on Saturday, 17th October 2020.”

Scoring a boxing match is subjective. But…

The first two official scores were completely understandable as all is up for interpretation. The rounds were very close and scoring it was difficult. Do you score for the solid occasional blow or the more ‘rat-a-tat’ volume of punches, effective aggression or defense or, well, so many contributing factors.

So moving on to the 117-111 card handed in by experienced referee and judge Terry O’Connor (he was just judging this bout and not as the referee). Awful, just a plain robbery. As Mathew Macklin quoted (who was commentating along with Adam Smith of Sky)….“flabbergasted!” What the hell was he watching?? That is a question the majority of all watching (apart from I’m sure just a couple of loyal Ritson supporters) were asking.

THE ANSWER TO THAT QUESTION…. 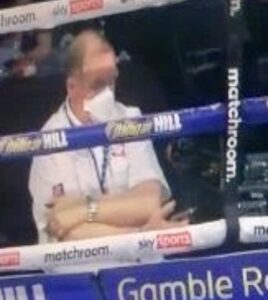 Putting two plus two together and getting four is not a hard sum up of what appears to be taking place by Mr O’Connor. Regardless of what it is or isn’t (and my eleven year old said “phone”) he was not doing what he was meant to be doing and that was watching two boxers box and scoring it accordingly….and getting paid for it.

Is it a coincidence that one of the most shocking scorecards handed in for a British fight was by someone who’s attention was elsewhere, regardless of it being a phone or something else and for how long? No.

WBC president Mauricio Sulaiman retweeted the image, adding: “this image is extremely troubling to any person involved in boxing.”

This is really not on. It’s not about just jumping on the social media bandwagon of gossip and outrage, but this is judging that ultimately effects someones livelihood and more importantly, their health and safety. The knock on effect as to how this effects a fighter is long….think about it.

He is now to face an inquiry with the stewards of the British Boxing Board of Control.

I have heard a couple of people defending his actions. Sorry, but a phone should NOT be on and as such readable, regardless of the content to any message that had come through. It should not be on. He should be judging. He should be doing his job that again affects boxers financially and hurts the sport in which we love.

Do I think there will be justice of this disgusting action, no. Vasquez was sent back home to his family in Mexico wronged by UK boxing and I doubt nothing will be done to rectify that.

The fight should be changed to a NO DECISION and with an immediate rematch called, and certainly not with Mr O’Connor judging. In fact, he should not be allowed to judge ever again. Will he be reprimanded accordingly, I doubt it.