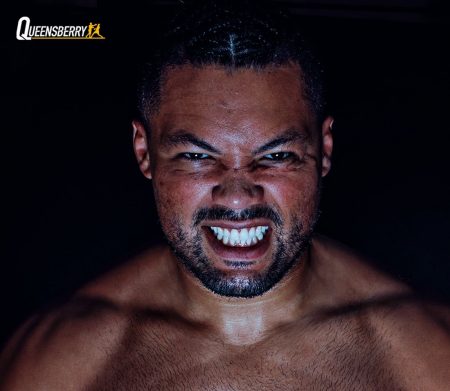 Joe Joyce now happy amongst the high rollers having taken his training over to Las Vegas to get himself ready for the high-stakes heavyweight collision with Joseph Parker on September 24 at the AO Arena in Manchester which is being shown exclusively live on BT Sport Box Office, promoted by Frank Warren for Queensberry Promotions in association with BOXXER.

Of course, it is highly unlikely that Big Joe will be laying any chips on the Strip, he will be tucked away with his trainer Ismael Salas at the renowned Salas Boxing Academy drilling a game plan to defeat the WBO No.2 ranked New Zealander.

For Joyce, the talking is done for now and his parting shot was a simple ‘”I’ll see you on the other side”.

Tickets went on sale today for this heavyweight blockbuster priced from £40 and can be secured by visiting ticketmaster.co.uk.

There was no shortage of words exchanged prior to Joyce’s departure for Stateside and it is clear that Joyce intends to punish the former WBO world champion for the delays leading up to the fight finally being made.

“I’m so glad this fight has been signed and sorted out, so now I can head to Vegas and start my camp,” he added. “Parker seems ready and he is going to be a tough man to beat.

“There was all the frustration of this being postponed and all the messing about, I’ve been hearing all the ins and outs from my team, but I am happy it is going ahead now. I am taking my frustration out on him.

“Now it is game time and all niceties are put aside. I was sick of hearing about it all and now I just want to get in there and beat him up.

“It will be my toughest fight to date, he can take a shot and he is more well rounded than anyone I’ve faced. He will be a little bit different but I will get the job done, probably in the later rounds.

“I’d love to knock him out or stop him! I’d like my KO-ratio to stay high and keep it going. I don’t want to go to points really.”

Tickets for ‘Nowhere to Run’ – the heavyweight clash between Joe Joyce and Joe Parker on 24 September at the AO Arena, Manchester – are priced from £40 and are on sale now exclusively from Ticketmaster.co.uk.