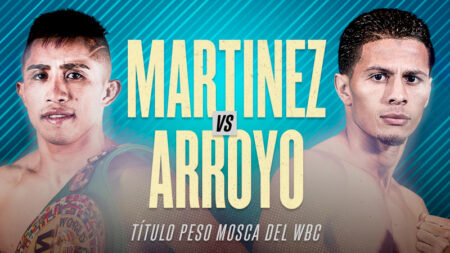 The flyweight champion of the World Boxing Council, Julio César “Rey” Martínez, will return to the ring to face the interim champion, the talented Puerto Rican McWilliams Arroyo, next Friday, November 19, at the SNHU Arena, in Manchester, New Hampshire.

Julio César “Rey” Martínez comes from defending his crown against fellow Mexican Joel Córdova, whom he knocked out in the sixth round.

This intriguing fight has been postponed a couple of times due to Martinez’s medical problems, but this time both fighters report in excellent condition to define who is the best fighter in the division.

The bout which is promoted by Matchroom Boxing, in association with DiBella Entertainment and Golden Boy Promotions, will be televised on DAZN.