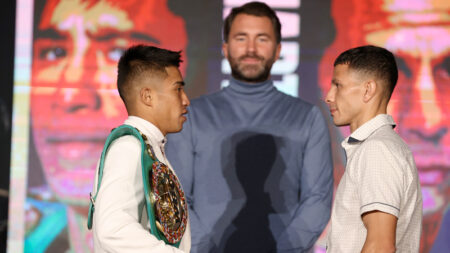 The flyweight champion of the World Boxing Council, Mexican Julio César “Rey” Martínez, will be defending his title, against the mandatory challenger, the Puerto Rican McWilliams Arroyo, in one of the main fights of a card of four world championships, which will be will take place this Friday, at the SNHU Arena, in Manchester, New Hampshire, United States.

“Rey” Martínez (18-1, 14 knockouts) will fight Arroyo (21-4, 16 knockouts), the fourth defense of his title, which he won in December 2019, by knocking out now former world champion Cristofer Rosales in nine rounds.

Since then, Martínez has defended his crown against Jay Harris, Moisés Calleros and Joel Córdova, to confirm himself as one of the best fly champions of today. Friday’s fight is important for “King” Martinez, but the Mexican is not satisfied with that and has many plans, including unifying and going up to 115 to have great fights.

Although the fight with the Puerto Rican is the greatest demand right now, Martínez is not afraid to talk about future plans and already savors duels with the maximum representatives of the super flies, such as his compatriot Juan Francisco “Gallo” Estrada or the Nicaraguan Román “Chocolatito ”González.

Arroyo was defeated by Japanese Kazuto Ioka, in September 2019, but since then he has won against Carlos Maldonado, Carlos “Chocorroncito” Buitrago, Juan Gabriel Medina and Abraham Rodríguez.

The fight is promoted by Matchroom Boxing and will be broadcast on DAZN.