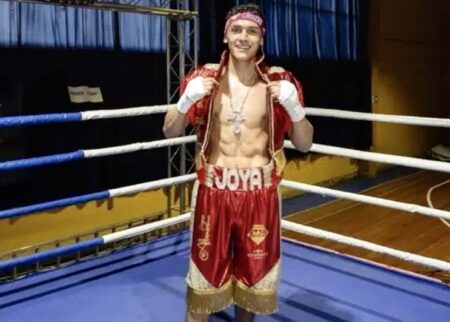 Rising Chilean star Junior Cruzat is set for his Chilean national title fight on October 15, with the rising featherweight standout sharing a training base with brothers Andrew and Jason Moloney.

Cruzat has spent a portion of his camp in Australia with the highly rated pair, and he discussed the lessons he’s learnt working with both brothers who feature on the undercard of George Kambosos Jr vs Devin Haney.

Cruzat said, “You learn so much working with the Moloney brothers. They are both cool guys, but in the ring they can stun you with their talent.

“Andrew Moloney is a high level boxer, he is an incredible talent, and he has so much skill with the jab. You learn a lot about your defence but different ways to use the jab from Andrew.

“Jason is ferocious, and comes forward with great inside movement. It’s great for your defence, but he has a good variety and uses angles. So that was a great experience too.”

Cruzat heads into his first championship fight, as he looks to follow in the footsteps of fellow Chilean Andres Campos who is also guided by Dragon Fire Boxing.

Junior opened up about his first title challenge, “I’m excited to be in my first title fight and I believe I’m ready for this now. Training in Australia has made me stone cold in the ring, and I’m going to put on the performance of my career.

“Whether I win by knockout or on points I’m going to be the next champion of Chile and that’s the bottom line. I want to thank everybody at Dragon Fire Boxing for getting me this opportunity, and I’m sure it will be the first of many titles in my career.”