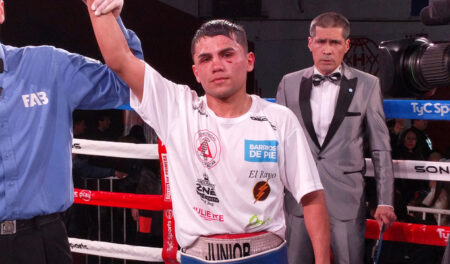 Friday night on EstrellaTV’s Boxeo EstrellaTV, Junior Leandro Zarate (17-4 & 7 KO’s) defeated Carlos Vado Bautista (9-6-1 & 2 KO’s), by unanimous decision, 78-74, 79-73 and 80-72, in a 10-Round Super Flyweight fight for the Fedelatin WBA Super Flyweight Title. The series occurs on the last Friday of each month, and last night, the fights were broadcast from Buenos Aires Casino in Buenos Aires, Argentina.

The first two rounds were the best for Bautista, imposing rhythm and quality, taking Zarate by surprise, who was not in sync initially. Zarate found a plan B and C in his corner to change his boxing style, taking advantage of Bautista’s mistakes, who attacked from the front. When Bautista missed blows from mid-distance, that mistake made it difficult for him to receive the combination of three hits, and Bautista became a fixed target for Zarate.

Using uppercut punches, Zarate saw the gaps in Bautista’s guard and threw punches to Bautista’s head. However, the fight ended, and the judges’ cards gave Zarate the victory by a difference of 4, 6, and up to 8 points. Zarate and Zarate’s corner knew how to analyze Bautista’s style and made the necessary adjustments to achieve victory.

Lescurat knew how to take advantage of the frontal attack by Sanabia. By launching her blows, and her guard at mid-height, Sanabia was exposed to Lescurat’s blows which made her miss and threw blows into the air. Not having a battle plan B, Sanabia fought and looked for victory, but Lescurat’s waist movement allowed hit to hit from all angles and score points very easily, while Lescurat’s corner sent her to look for the knockout by finding the fighting deficiencies from Sanabia. As the rounds passed, it was only a matter of time before the judges gave the unanimous victory to Lesccurat.