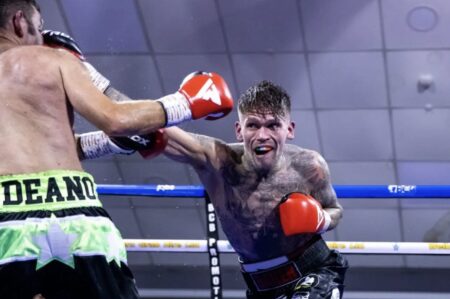 Kane Baker will be going after his rivals if he can pick up another quick-fire victory all of 20 days since last seeing action.

This time it’s on home turf at the H Suite in Edgbaston, Birmingham, during a weekend double-header of shows staged by BCB Promotions, set for October 16 and 17.

He’s a part of Saturday’s fight night, which will be the 24th time in a pro ring. Less than three weeks earlier, Baker successfully completed a full six rounds, at Walsall Football Club.

The 31-year-old Brummie, from Bartley Green, claimed each session against Dean Evans to register a points whitewash, earning a 60-54 decision from referee Chris Dean.

It was the ideal way for Baker to rebound from his last defeat, where he was halted during the fifth of a 10-rounder to Youseeh Khoumari in March.

That took place on a Sky Sports televised bill in Gibraltar, one of six times Baker has boxed in front of their cameras, along with appearances on BT Sport and ITV Boxing.

Baker’s career so far has also taken in trips to Northern Ireland (Belfast) and Saudi Arabia (Jeddah), as he racked up the air miles to get himself recognised.

Of the eight losses on his pro record, seven of them were undefeated with the other, Myron Mills, reigning supreme and defending the English lightweight title.

Baker has claimed the Midlands lightweight crown himself over the course of his 15 wins, a belt he never lost and was later vacated.

He’s never forgotten his roots, either, with both of those title tests taking place in Birmingham, as did five other wins. Now comes a second time under the H Suite lights.

Baker said: “I’ll be properly back on track after this. I’m always ready to go, when the phone rings, and I’m a lot better when I’m active, so I’m happy to be out again so soon.

“I really enjoyed my last fight, there was a lot of my people there and this will be even better, with it being in Birmingham. Hopefully, all of the local fans will turn out.

“I got some good feedback on my performance and it was against a live opponent. As soon as the first bell went, he came straight at me!

“I met him and matched him, let my shots go and I felt like I got better, with every round. He made me think, because he was game and kept coming forward.

“I got my jab going, used my feet and listened to my coach (Errol Johnson). I cut off the ring more as it went on, too. The things I needed to work on, I felt I did well.

“That should stand me in good stead and now I can start building up a bit of momentum with, hopefully, another good result. That’s what I’m concentrating on.

“I’m always after opportunities and, by the end of the year, I’m expecting something to come up, whether that’s for a title or against someone who is highly-ranked.

“Back-to-back wins puts me in a stronger position to do that, so that’s the first thing I need to do. I want to box at my best and get the job done.”

Tickets for the two Birmingham bills are available now, priced at £40 standard or £75 VIP ringside with buffet per day, directly from the boxers or by visiting myfighttickets.com.