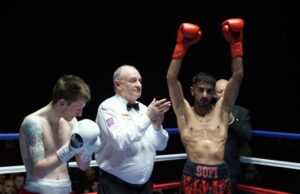 Michael Gomez Jr has a new opponent and date for his Central Area Super Featherweight Title fight after original opponent – and champion – Kane Salvin was forced to withdraw from their slated May 21 contest.

Gomez Jr will now face Sufyaan Ahmed (pictured) for the vacant belt on June 18 at Sheffield Arena live on Fightzone TV, with Salvin relinquishing his title after suffering an illness.

Promoter Dennis Hobson said: “Everyone at Fight Academy would like to send Kane our best wishes. It’s a real shame for him but his health comes first. As soon as he’s ready, we’ll get him back to where he was with his career. We’ve got high hopes for Kane, and he’s a big part of our future plans.

“I’m pleased that we’ve been able to rearrange the fight for Michael, and that Sufi has agreed to step in. When Kane beat Sufi back in December to win the Central Area Title, it was a cracking close fight with plenty of people believing Sufi came out on top. It’s a second chance for Sufi and he’s up against another very good fight in Gomez Jr. This will be another great one to watch on Fightzone.”