Karol Itauma: From Westminster to Wembley 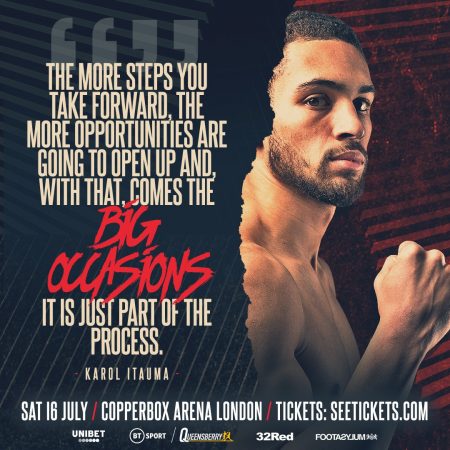 In December 2020, in the majestic surroundings yet eerie silence of Church House in Westminster, ex-amateur superstar Karol Itauma made his professional debut without the thunderous support of his army of followers from Kent.

Echoes instead of cheers provided the backdrop for his introduction to the light heavyweight division as he turned in an impressive display to overcome redoubtable journeyman Lewis van Poetsch via a shutout on the scorecard.

Fast forward 16 months and his last fight, the contrast in sporting environment couldn’t have been more apparent, as Itauma was handed a slot on the blockbuster Fury-Whyte bill at Wembley Stadium.

The Chatham-based Itauma – who returns to the ring at the Copper Box Arena on July 16 – hadn’t even been to Wembley before and he thrust into the spotlight in support of the headline act that attracted a crowd of 94,000 people.

The 21-year-old said he has yet to really process his stark change of circumstances across the short space of time between fights one and seven.

“The crazy thing is I haven’t really taken it all in yet,” reflected the Olympic Youth gold medallist. “For example, I was just concentrating on the job in hand and didn’t let any external factors get to me.

“Obviously when I look back now at some of the photos and videos, I am like ‘wow’, it was crazy.

“It was special for my family because not too many people can say they have boxed at Wembley and, for sure, it was something great.

“In terms of procedure things remained the same, obviously, with the warm-up, walk-out and all that stuff. The occasion though, Tyson Fury boxing in front of 94,000 and being there that night, added a bit extra to it all.

“In terms of pressure, there was no more or anything like that, I was just excited to be there and perform. As soon as we got there I went out and had a look at everything and it was incredible.”

Getting to fight on the biggest stage of all tells a young fighter such as Itauma that anything is possible in this sport as long as wins, popularity and fanbase continue to mount up

“Absolutely, and I feel like the start is believing in it,” he considered. “If you can believe in yourself and know that you can be there, that is the first step of it all. Some people don’t think they can achieve something like that, so straight away they are ruling themselves out.

“It was great to get a taste of it and, since then, I have kept my head down and I’m working hard towards the next one.

“The more steps you take forward, the more opportunities are going to open up and, with that, comes the big occasions. It is just part of the process.”

What Itauma did want on the night was more of a fight. His Polish opponent Michal Ciach succumbed in the second round, leaving the home fighter feeling a little bit short changed.

“I was happy, but during the moment I wasn’t happy because as a fighter I put in a lot and I wanted to be tested. However, my coach sat me down and said it is all a stepping stone and all part of the process of learning.

“It is all about getting better and that occasion was crazy to be a part of, so I am just blessed and grateful for the opportunity. But I know where we are heading and it is about sticking to a plan.”

Hamzah Sheeraz fights for the vacant WBC Silver middleweight title against Francisco Emanuel Torres on Saturday, 2 July at London’s Copper Box Arena. The British, Commonwealth and IBF European super middleweight titles will be on the line when Lennox Clarke and Mark Heffron meet in what should be a blockbuster battle between two big punchers.