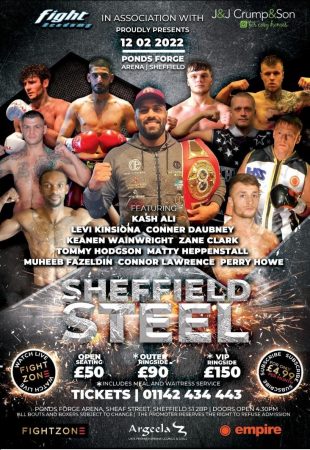 Kash Ali gets headline honours on Saturday February 12 at Sheffield’s Ponds Forge Arena, on the first Fight Academy and Fightzone event of 2022.

Looking to continue an impressive run of form, the top rated heavyweight will take on Germany’s Huenkar Polat in – what could well be – a risky encounter. Young and ambitious, the 21-year-old German has won eight of 11 fights, with every one of his victories ending by KO. A heavy-hitter, Polat will head into the contest knowing that he can launch his career into orbit by landing just one of his big shots.

This year is a pivotal one for Kash – the big man from Rotherham. After claiming the IBF European Heavyweight Title with an impressive stoppage win over rated Czech fighter, Tomas Salek, in May last year; the 29-year-old is on the up and ready to prove himself at top contender level.

Kash’s game has improved immeasurably since teaming up with trainer and former heavyweight, Richard Towers. With just a single loss on his 21-fight record – a notorious disqualification defeat to Liverpool’s David Price – manager and promoter, Dennis Hobson, is convinced he has a man on his hands who will put some notable heavyweight noses out of joint this year.

“We’ve guided Kash perfectly since he’s been with us,” said Hobson, who has an enviable reputation for manoeuvring fighters onto world honours. “He has been developing – not just as a fighter but as a person – under Richard [Towers], and he has it all; a great skillset, the physical attributes and he hits very hard.

“It was unfortunate that we weren’t able to get him out before Christmas to make another defence of his IBF Title, but we’ve now got him in with this young fighter with a big punch, who will be coming to the UK to make a name for himself. If Kash can get through this fight, then we’ll be looking to let him loose on a big name.”

“We have some really exciting plans for the Fightzone channel this year, and we’ve made our ambitions clear with an already packed schedule of shows from February through to April,” explained Fightzone’s Chief Operating Officer, Asif Vali.

“Fightzone has achieved so much already since its launch just six months ago and has put on some great title fights and shows. We’re looking forward to working with promoters from up and down the country, and I’m excited to kick off 2022 with this show in the great boxing city of Sheffield.”