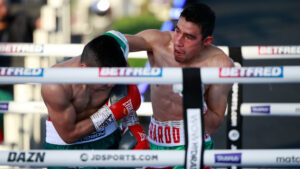 Kash Farooq showed off his wide repertoire of skills to get the better of Luis Gerardo Castillo and pick up the vacant WBC International Bantamweight Title.

The Mexican fighter never stopped coming forward but he had no answer for Farooq’s frequent bursts. Scores from the ringside judges were 100-90 x 2, and 100-91.

“I boxed to the game plan, that was it, you want to get in there and always entertain but I followed the game plan that was it,” Farooq told Matchroom. “I listened to my trainer, and he just told me to box, you couldn’t get any footage of him, so I didn’t know what he was about, I adapted on the night and did what I had to do.

“I showed tonight the other side of me that can box as well. He’s not world class but it’s a different side of my boxing that I showed, he was tough and game. We didn’t know what we were up against.

“If you let anybody hit you, they can punch, he had a bit of sting to his punches, but the name of the game is hit and don’t get hit and that’s what I did in this fight.

“He [Gerardo] can’t speak and can’t hear so it’s something different, people were saying he’s come to win, and this was going to change his life, these types of boys want to win but he was up against me so – I wanted to win as much as he did.

“These boys are coming from nothing, some of them grew up in poverty and it’s a different lifestyle in Mexico – they fight for a living to make their lives better. It’s either me or him and it wasn’t going to be me today.

“It was another learning fight for me, and I’ll progress again, it’s something I picked up – for me it’s just about developing and getting better. This is just another clinical performance by me.

“My job is just to fight, and they tell me what route they’re going to go through. If I had a choice I’d fight [McGregor] but it’s down to them and they’ll make the right decision for me.

“It is a big fight for Scotland, me and Lee can sell out the SSE Hydro, if it’s the right time and it has a good build me, we can do it. It’s just me and him boxing each other.

“For me I’ll take a few days off but it’s back to training. When I’ll really take some time off is when I call it a day and retire. Now I’ve still got levels to progress, go back to the gym and work on things, it’s a lifestyle in boxing and it a short career, you don’t know when retirement is coming. For me I’m going to put everything into boxing for the next few years of my life.”