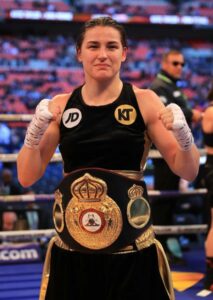 Irish Katie Taylor will return to the ring this Saturday at the Manchester Arena to face England’s Natasha Jonas to defend her World Boxing Association (WBA) Lightweight title and the rest of the belts she holds.

In addition to the WBA belt, Taylor also holds the WBC, IBF, and WBO belts. The 135-pound queen was the great star of the year 2020 in women’s boxing as she was able to make two great fights in a very complicated calendar and achieved great victories.

Taylor got her WBA belt in October 2017, when she defeated Anahi Sanchez by unanimous decision. Since then, she has made 9 defenses and is looking forward to completing 10 this weekend.

Now, the former Rio 2016 Olympic gold medalist will face Natasha Jonas. The Liverpool native is on the rise and has already been a regional champion for the pioneer body, as well as having experience in a world title fight at 130 lbs. Jonas had a good amateur career and in the pro ranks she has achieved great things in a short time, but now she is facing the big opportunity of her career and she wants to take advantage of it.

The showdown will be part of the big event organized by Matchroom Boxing and will feature several title fights, including the defense of WBA Light Heavyweight Super Champion Dmitry Bivol.