Katie Taylor: I’m privileged to inspire the next generation 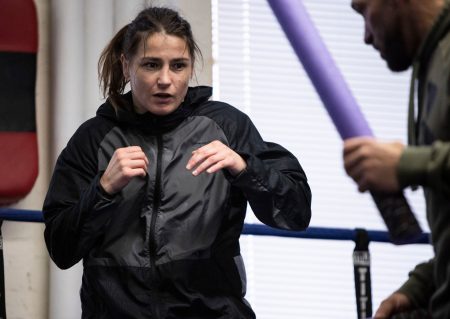 Katie Taylor and Amanda Serrano are set to make history in an epic battle for Taylor’s undisputed Lightweight title at Madison Square Garden in New York on Saturday, April 30 live worldwide on DAZN – and Taylor is thrilled to be part of shining the brightest ever light on women’s boxing.

TICKETS FOR TAYLOR VS. SERRANO ARE ON SALE NOW FROM TICKETMASTER.COM

Taylor and Serrano will become the first female fighters to headline ‘The World’s Most Famous Arena’ in its 140-year history in the process. Irish favorite Taylor (20-0 6 KOs) puts her 135lbs hardware on the line for the sixth time in the Big Apple and does so against seven-weight champion Serrano (42-1-1 30 KOs), the Puerto Rican ace and Brooklyn native.

Both fighters can proudly state that they have played huge roles in the recent rise in popularity for women’s boxing, and when they step through the ropes at the famous arena in ten days’ time, they smash through yet another glass ceiling and showcase women’s boxing on the grandest of stages.

“This is just a special occasion for me, to headline a huge fight like this at Madison Square Garden,” said Taylor. “It’s being billed as the biggest fight in female boxing history. This is just incredible and a real privilege for me.

“I love being involved in these kinds of fights. These are the challenges that I’ve always wanted. I don’t think I’ve ever backed down from any challenge. I’ve wanted to face the very best.

“Amanda Serrano is a fantastic fighter, she’s a great champion and she’s not here for no reason. She deserves this opportunity as well. She’s been pioneering her own way and that’s why this fight is the best in female boxing history.  We have champion versus champion. The best versus the best and this is why this fight is so special.

“This fight is genuinely the biggest fight in boxing as a whole right now!

“I feel very privileged to be in this position and to be an inspiration to the next generation and to have those young girls look up to me. It’s a huge responsibility as well and I want to set a great example for these young girls coming up. I want to give them hope and I want them to know thy dreams they have in their hearts can be possible.”

“Growing up I had to pretend I was a boy to get fights. I had the headgear on, and my hair tucked into the headgear. They just had my name down as K. Taylor and obviously when the headgear came off there was an uproar because all the judges and officials saw I was a girl.

“I don’t grave the attention or crave the media attention. I don’t want to be famous; I just want to be the best boxer in the world.

Taylor v. Serrano will have a star-studded supporting cast when Jessie Vargas and Liam Smith meet in a must-win battle at Super-Welterweight and there is more undisputed action on the card as Franchon Crews-Dezurn and Elin Cederroos decide who is the top dog at 168lbs.