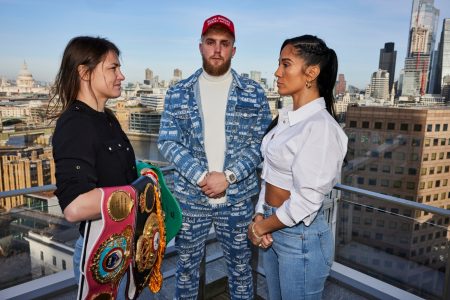 Katie Taylor has blasted Jake Paul’s suggestion that the rematch of the mega Madison Square Garden showdown with Amanda Serrano should be at 126lbs or a 130lbs catchweight.

Taylor (21-0, 6 KO’s), who edged out Serrano back in April to retain her Lightweight crown in an epic fight for the ages, spoke on Matchroom Boxing’s new podcast Flash Knockdown and stood firm that the rematch will only happen at Lightweight.

“What is that about?”, said Taylor. I’ve never heard such nonsense in all my life. I’ve never heard someone say something as stupid as that to be quite honest. I think they’re just trying to play a few games. I’m pretty sure Jake knows I’m not going to get down to 126, I don’t think I’ve ever heard of a situation in boxing where the champion wins but has the rematch in a lower weight division. It is real nonsense! I don’t know if he’s playing games or it is naivety but the rematch is going to be at 135lbs.

“I don’t think Amanda’s recent fight falling through will delay or effect the rematch. I was hoping for the rematch to happen straight after the last fight but it doesn’t look like it’s going to happen until next year now.

“I just want to be involved in the biggest fights possible but I’m not sure who I’m going to be fighting next right now but I’m planning on returning to the ring this year in November / December. The team have been talking to the likes of Cris Cyborg. I only had two or three days off after the Serrano fight so I’m just itching to get back in the ring!”

As well as speaking about the Serrano rematch, Taylor also reflected on the first fight with her Puerto Rican dance partner and her memories of the London Games, admitting the whole experience in New York surpassed the emotions she felt when she captured Olympic Gold ten years ago this week.

“I never thought anything would surpass the London Olympics but I think that night at Madison Square Garden did surpass it! It was definitely the most special experience of my career to date. The atmosphere between the Irish and the Puerto Rican fans was incredible, you couldn’t even hear the bell ringing! It was history making and a huge moment for the sport.

“In big fights there is always the possibility that you’re going to get hurt at some stage but that’s where all the training and preparation comes into play. I put myself in the trenches everyday and that’s what allows you to show your heart and your courage in the ring. I’m just glad I was able to get through those tough moments in the fifth round and then come on stronger as the fight went on.

“Thinking about the Olympics, it does and it doesn’t feel ten years ago. I can definitely remember the day as if it was yesterday but a lot has happened in those ten years. It was my childhood dream coming to pass, I was going into the competition with so much pressure on me and the weight of the nation on my shoulders. When I won gold it was just a feeling of relief more than anything!

“I remember putting on my Olympic kit and thinking how I’d dreamt of this moment. Looking at the Olympic Rings on my shorts and knowing I was about to walk out to represent my country at the Games, it was so special.

“Everyone in Ireland assumed I was going to win gold, I don’t think I slept for a second the night before the final! I don’t think anything will ever compare to the pressure I felt at the Olympic Games. If I got through those games, I can get through anything in life! When I started boxing at ten years old there was no real such thing as women’s boxing but now at home in Ireland when you see all the young girls in the gyms, that means everything to me.