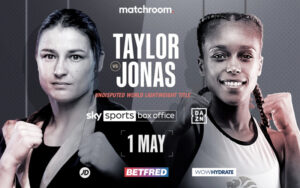 Taylor defeated Jonas in the quarterfinals of the 2012 London Olympics. The two warriors will now face off almost ten years on.
Taylor, consolidated as one of the best fighters on the planet, has defeated Miriam Gutiérrez in her most recent bout, last November.

“Natasha showed in her last fight that she is at the highest level, so it’s a huge challenge for me and I’m really looking forward to getting into the ring,” Taylor said. “It’s a fight that people have been asking for and it’s the kind of fights you want to be a part of. People are still talking about our fight at the 2012 Olympics and I think that turned out to be a real eye-opener for people in terms of what women’s boxing is. I look forward to another tough fight on May 1 and I’m looking forward to defending my titles.”

“I’m very excited about the fight, I established myself on the world stage in my last fight,” Jonas said, adding: “Katie is different from Terri Harper, she has other kinds of qualities. I am ready to step into the ring against any rival. I said I wanted to be a world champion and I am ready for this.”

The show, which is promoted by Matchroom Boxing, will be televised on Sky Sports in the UK and on DAZN.

Amanda Serrano & Daniela Bermúdez Speak Ahead of Thursdays Fight Whyte vs. Povetkin 2 “The Rumble on the Rock” Fight Week