Katie Taylor Quotes Ahead of Tonight’s Rematch With Delfine Persoon 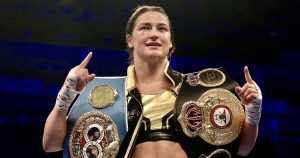 “I wouldn’t say I now consider her more dangerous as she’s out for revenge,” Taylor said. “The first time I fought her I knew she was a fantastic fighter, I knew it would be my most difficult fight.

“There was going to be a rematch just because it was a close fight. I am involved in this because I want to be in the big fights. I knew this rematch would be inevitable. When Serrano did pull out and Persoon was available we were delighted about it. I’m so excited for it.

“The last fight was very close and I guess I do have a bee in my bonnet for every single fight,” Taylor added. “I don’t want to leave any question marks over any fight and I’m looking forward to sorting that out on Saturday night.

“I don’t I resent anyone for their opinion on the fight but I don’t want to leave any question marks. Everyone has an opinion after the fight, there will be differences of opinion.

“I’m a very composed person. I don’t take notice of what people are saying. I’m sitting here as the undisputed champion no matter what she says. I’m a quiet person. I don’t feel the need to bite back or shout back. I’ll do my talking in the ring.

“Burn out is not a concern,” she said. “We train smart. I train differently six months out than I do. I do take a few days off here and there. I’m never in fear I will over-train.

“For me, motivation wise the venue is not going to make any difference. I’ve fought big amateur fights in front of only a few fans. Regardless if there are ten people in there or 10,000, I’m always going to be up for it. I don’t see that as a problem for me.

“I don’t know what her mindset was going into the qualifiers, I didn’t think it was a great choice for her to step down from the professional side of boxing. What works for her as a pro won’t work for her in the amateur game.

“I didn’t believe she would be successful. They are different sports. I thought it was a strange choice for her to go back to an amateur fighter.”

“I wouldn’t say I’m thinking beyond Saturday night, I’m open to fighting anyone.”