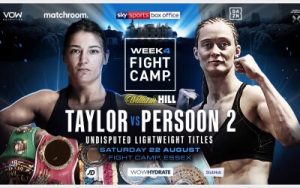 Rewind time back to June of last year at Madison Square Garden and what a fight it was. Ireland’s Katie Taylor (15-0, 6 KO’s) and Belgium’s Delfine Persoon (44-2, 18 KO’s) put it all on the line over 10 rounds, Taylor victorious but this result was not a popular one.

COVID-19 gripped and controlled worldwide sport (in the process sadly taking many lives worldwide) delaying a welcomed rematch that both parties were desperate to make happen. Fast forward time to August 22nd and on the the last installment of Eddie Hearn’s Fight Camp (Sky Sports PPV) and headlined by Dillian Whyte vs Alexander Povetkin, they both have their chance to put the record straight to who is the true victor of the WBC, WBA, IBF and WBO female lightweight title trinkets.

So much is on the line, it’s not just about title belts but pride and pugilistic justice.

“I’m very grateful. Obviously the last few months I’ve been training hard for a huge fight with Serrano,” Ireland’s Taylor (15-0, 6 KO’s) noted during a virtual press conference on Matchroom Boxing’s social media channel to promote the event. “Obviously, that fight fell through and the only fight that made sense was the Persoon rematch.

“The last fight was a huge fight. It was very close and is a fight that is deserving of a rematch. This is a fight that I’ve been looking forward to since that first fight. It’s the biggest fight in women’s boxing right now.”

“This is a fight I wanted straight away, really, after the first fight,” Taylor insisted. “I only want to be involved in big fights. I love the big fights, I love this challenge. This is the reason I’m in the sport of boxing at the end of the day. You can’t miss out on these opportunities.

“I think both fights are huge fights. I won’t say I’m any more motivated for this fight. I’m ready for this fight,” Taylor continues. “We’ve been preparing since January for a big, big fight.