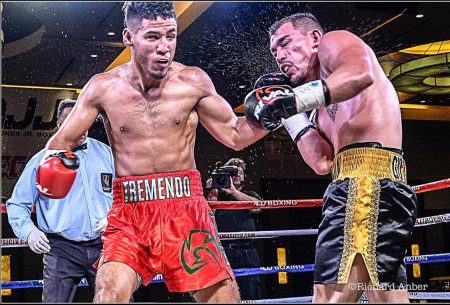 This is a potential career-changing fight for Castaneda, who won his first 17 pro fights before losing his last four matches. It should be noted that, keeping it in perspective, all four of Castaneda’s losses were fought in his opponent’s backyard and/or on their promoter’s show, and their combined record was 88-5.

“This is a career-changing fight for me because it puts me as a top-notch welterweight to reckon with,” explained the 28-year-old Castaneda, who is promoted by Roy Jones, Jr., (RJJ) Boxing Promotions. “An impressive win can get me a big fight in the welterweight division.”

Castaneda will still be taking on the promoter’s fighter, but this time “Tremendo” will have the advantage of fighting at home in San Antonio for the first time in more than 2 ½ years.

“It feels great to be fighting back at home since all the time I’ve been away,” Castaneda said. “I honestly don’t like traveling much. I miss my home crowed because all my fan support is here in San Antonio. Having my city behind me means the world to me.

Castaneda, who has never been stopped as a prizefighter, is fighting one of Golden Boy’s brightest prospects in 2016 Mexican Olympian Curiel, who will be making his first title defense of the NABF crown he captured this past June, stopping Ferdinand Kerobyan (14-1) in the ninth road.

“I believe I will outbox my opponent for 10 rounds and get a unanimous decision win,” Castaneda concluded. “I’d never heard of him. I’m ready for whatever comes my way, and I will execute for a victory.”

Kendo Castaneda is at the crossroads of his career needing to live up to his “Tremendo” nickname in order to turnaround his career.