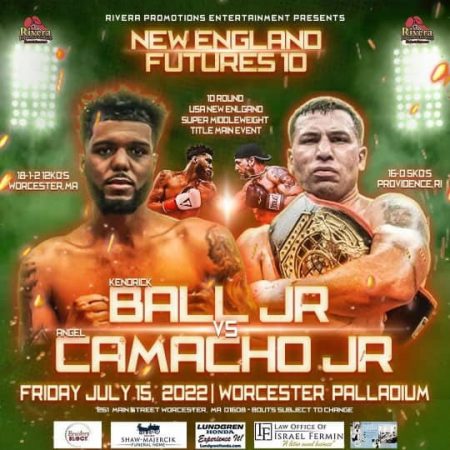 This is the biggest local bout in the past several years and it’s a true New England Championship fight. You have two established fighters, one from Worcester, Massachusetts and the other from Providence, Rhode Island, that are willing to get in the ring to determine who the best in the region is. This fight is about representing their city and state. Three-time, 2-division World Champion, RPE Promoter Jose Antonio Rivera commented, “RPE is excited to have the two top Super Middleweights in New England fighting each other! This is what boxing is all about.”

Kendrick Ball Jr. has been able to stay active fighting five times since the Covid-19 shutdown. His most recent fight was a 5th round TKO victory in April 2022. He will be looking to keep his positive momentum going. This will be the sixth time that Ball enters the ring against an undefeated opponent and he is up for the challenge. Here’s what Kendrick Ball Jr. had to say about the fight, “I’ve been in this position before, it’s just another step for me to climb up the ladder and prove myself again to my fans and the world. I’m thankful for all of the support from Worcester. I’m glad to be back home fighting in front of my city. On July 15th, I’ll be ready for whatever comes my way.”

Angel Camacho Jr.’s last fight was at the Worcester Palladium in 2019. He is no stranger to lengthy layoffs as this will be his fourth time returning to the ring after a multiple year hiatus. Camacho, who is undefeated as a pro, has beat some of the biggest names in New England, including Richard Gingras, Paul Gonsalves, and the late Keith Kozlin. This is what Angel Camacho Jr. had to share about the fight, “I’m excited to be back fighting at the Worcester Palladium, I love my people out there. Life is crazy and I have a lot of responsibilities as a man so unfortunately it got in the way of my activity as a professional fighter, but my body is well oiled and fresh… I’ve always had nothing but love for the Ball family, I’ve rooted for Ken in and out of the ring, and he and his family are great people. Come July 15th this is going to be the biggest and toughest fight of Ken’s career. I know Ken will show up ready to go so expect a rough and tenacious war.”

Waymaker Management’s Founder, Artie DePinho stated, “When we signed Kendrick, he said he wanted to fight the top guys in New England to prove that he is the best. This is his opportunity to show everyone what I know he’s capable of doing. I have a lot of respect for Angel and have known him for over 15 years. He is undefeated for a reason and this is the type of challenge that Kendrick really wants. I’m looking forward to seeing the whole City of Worcester coming out and supporting Kendrick as he makes his statement.”

This matchup is a fight fans dream. RPE Matchmaker AJ Rivera said, “Kendrick has never asked for easy fights. He has taken on tough opposition fighting five undefeated guys, he’s no stranger to always trying to challenge and prove he belongs. Angel is a tough undefeated fighter who brings slick boxing skills to the ring. He’s fought some of New England’s best and won every fight. This fight is truly a New England treat.” You have two popular fighters who are daring to be great. The show will certainly be sold out and the atmosphere on fight night will be electric.