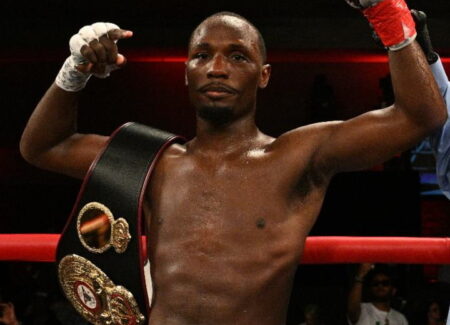 Junior welterweight contender Kenneth Sims Jr. (Chicago, Ill.) notched his second straight TKO win of 2022 on Saturday on the undercard of Frank Martin – Michel Rivera at the Chelsea inside the Cosmopolitan of Las Vegas.

The WBA Intercontinental Champion faced off with Rock Myrthil in an eight-round contest and it was all Sims from the opening round. Sims utilized a sharp jab and fast combinations to wear down the previously one loss Myrthil. The impact was evident in the fourth round as Sims stalked the tiring Myrthil and looked to find the finishing shot. The former amateur standout continued his onslaught in the fifth round until the referee had seen enough. Referee Celestino Ruiz jumped in at the 1:12 mark of the fifth round to stop the bout, giving Sims his 19th professional victory.

“I felt good. I started a little slow but once I warmed up, it was easy work. My jab was working. I believe I have one of the best jabs in boxing. The body work slowed him down a lot. That’s what broke him down and enabled me to get him out of there.” Sims said. “The stoppage was a combination of things. Once the body work slowed him down, then I started hurting him to the head. He couldn’t get out of the way of anything, so it was just a matter of time.”

Sims is hoping to be much more active in 2023 and finally get the big names he’s been chasing in the ring with him.

He has sought significant fights and a potential title shot since his upset win over Elvis Rodriguez in 2021 but potential opponents have avoided him and turned down potential fight offers. “In 2023, I want big fights. I want top guys at my weight class, and I want to get closer to being world champion.”

A Christmas baby, Sims looks forward to a happy holiday and birthday with his family. He’s not only looking forward to bigger fights in the new year. He and fiancé Jailyn will welcome a baby boy in February.

Kenneth Sims is a former U.S. National Champion and U.S. Olympic Trials participant and he currently holds a 19-2-1 record as a professional. A Chicago native and resident, he and his fiancé Jailyn live in the Chicago area with their daughter Nova.