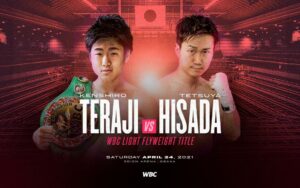 World Boxing Council light flyweight champion Kenshiro Teraji is another classic fighter in the smaller weight divisions, and he appears to have it all going for him, in the eighth defense of the title he`s firmly held since 2017.

The smiling, fresh faced and charismatic 29 year old undefeated champion, who`s nicknamed The Amazing Boy,  moves well, hits hard and has deft mastery of ring generalship. He`s an elegant, precise and ruthless attacker, behind an educated, pinpoint snappy left jab. His follow up left and right hooks are thuddingly accurate and the body shots he delivers with aplomb, are gaspingly breath taking.

When he going gets tough, he instinctively, but also intelligently employs an excellent defense, being elusively hard to hit, slipping punches with relaxed, assured but economic ease, while blocking others with his long arms. His footwork is neat, well placed and sometimes reminiscent of the great Ricardo “Finito Lopez.”

For a while he Anglicized his name, but now he fights under its full umbrella. His father Hisashi was once OPBF light heavyweight champion. Kenshiro has achieved his exulted pro championship status with only seventeen fights including ten KO`s, but prior to that he had a solid 58-16 amateur career, spanning 2007-2014, culminating in the Japanese National Championship.

In that same year he debuted professionally and 2015 he won the WBC Light flyweight Youth title, defeating Rolly Sumalpong, by UD, but it proved an instructive learning curve, as he was dropped hard in the opening round, got up chastened, and more prudently progressed to  victory.

In his next fight Kenshiro defeated Kenichi Horikawa to win the Japanese national title and then he added the OPBF title with another UD, this time against Toshimasa Ouchi.

It was time for a step up to world class and Kenshiro took on skilled Mexican southpaw Ganigan Lopez, who was WBC light flyweight champion, defeating him by UD.  An even harder fight in his first defense, against former champion Pedro Guevara, winning a majority decision in a closely contested bout.

Kenshiro appears to have then hit his stride. He TKO`d Gilberto Pedorza in four, Ganigan again… but this time in just two, Milan Melindo in seven, he defeated durable Saul “Baby” Juarez by UD, Jonathan Taconing in four and Randy Petalcorin, also in four.

He was supposed to fight in December, but had to overcome what are described as personal problems, before he could fully focus on business at hand, namely Tetsuya Hisada, at the Edion Arena, Osaka on April 24th.

Mandatory challenger Tetsuya, will feel at home in this bout, because he`s from Osaka, but at 36, he`s seven years older than the champ. It`s been an uneven career of 34-10-2, in which there have been triumphs, setback, wins, more bumps on the road and perseverance, to steer himself towards an opportunity for the ultimate glittering prize.

Some experts describe his footwork as rudimentary, his boxing skills as adequate, and him as a frequent hitter rather than a chilling one. Yet, he has stopped twenty of his opponents.  His debut was way back in 2003 as a 19 year old. But then he lost his next fight on a split decision to Takeshi Honda. He won a UD against previously undefeated Yusuke Kondo, and then a gap of eleven months. More wins and losses followed.

Tetsuya`s only stoppage loss, was when he fought Hiroyaki Kudaka at super flyweight. He sensibly went back to light fly and wanted to fight Kenshiro for the Japanese national title, but the younger man catapulted himself towards the absolute WBC crown before this could happen.

Tetsuya won the national title in 2017 and has successfully defended it five times. On October 1st 2019 he lost to 27 year old WBA Super light flyweight champion Hiroto Kyoguchi by UD, in the Edion Arena, Osaka. Prior to that he`s racked up thirteen victories.

Kenshiro is the clear, but not totally assured favorite. He does accomplish better in almost every department, he`s younger, fresher, more assured, more skilful and… he`s the champion.

On the other side of the scales, Tetsuya has appreciably more experience, has grimly had to fight his way back from adversity and the brink, time and again, and then there`s his advanced age to consider.

So it`s evident, that his is his last chance for the big time, which should wonderfully concentrate him in the execution of his task.  For him, it`s going to be now or never. He`s training as never before, because the longer it goes, the tougher it`ll become. He`s no longer a spring chicken!

Chandni Mehra vs. Suman Kumari May 1st For WBC India Championship Jamaine Ortiz vs. Joseph Adorno This Saturday in Florida