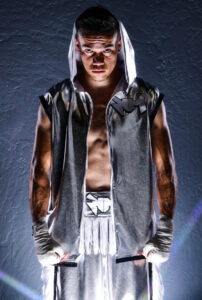 Split-T Management has signed lightweight Kevin Montano
The 23 year-old Montano is from Sacramento, California and had a distinguished amateur career that saw him rise to the number-two ranked lightweight in the United States.
“Leading up to the end of my amateur career, Split-T Management CEO David McWater was there for me in so many ways. Dave gave me so much advice, and seeing how he treated me in amateurs, I feel that I am in the right spot. He has so many great fighters like Teofimo Lopez , I feel that Dave has the power and intelligence to move my career with success,” said Montano
“I grew up in a bad town that was on par section A Housing, My family and friends wanted me to stay out of trouble, so my they kept me in the gym. When I won my 1st fight at nine, I loved the feeling of winning. Nothing compared to performing in front of a crowd, and have your named announced as a winner.”
Montano started boxing at the age of eight under coach Gary Sullenger. Sullenger has remained with Montano through his amateur and now into his professional career.
During Montano’s amateur career, Montano was a three-time California State Champion, the 2017 National Golden Gloves runner-up, 2017 Eastern qualifier runner-up, 2019 Western qualifier runner-up and he placed third in 2021 Nationals.
Montano, who is fluent in both English and Spanish is a graduate of Sacramento State, with a degree in Kinesiology.
He lists Roberto Duran, Pernell Whitaker, Teofimo Lopez and Canelo Alvarez as favorite fighters.
He will make his pro debut this Friday night, August 6th in Sacramento.