Kevin Montano & Tyler Marshall weigh in ahead of tonight in California 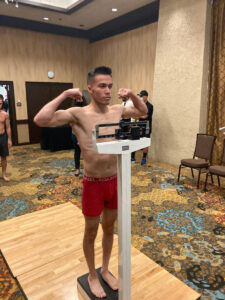 DoubleTree Hotel in Sacramento, California, USA 6/8/21
Split-T Management’s new signee, Kevin Montano will make his pro debut TONIGHT at the DoubleTree Hotel in Sacramento, California.
Montano will take on eight-fight veteran Tyler Marshall in a four-round super featherweight bout.
The 23 year-old Montano is from Sacramento, California and had a distinguished amateur career that saw him rise to the number-two ranked lightweight in the United States.
During Montano’s amateur career, Montano was a three-time California State Champion, the 2017 National Golden Gloves runner-up, 2017 Eastern qualifier runner-up, 2019 Western qualifier runner-up and he placed third in the 2021 Nationals.
Montano checked in at 129 lbs. Marshall was 127 lbs.