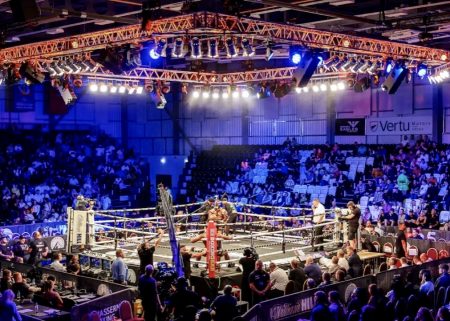 Thursday night at the Quiet Cannon / Montebello Country Club, ‘King’ Callum Walsh, (4-0, 3 KOs), of Cork Ireland won his fourth professional bout against Benjamin Whitaker, (15-9, 3 KO’s), in the featured fight of 360 Promotions’ Hollywood Fight Nights, broadcast live internationally on UFC FIGHT PASS. Fighting in front of a sold-out venue of passionate supporters, Walsh dropped Whittaker in the first round of their six round bout and displayed his full arsenal of world-class talents winning every round in the eyes of the judges with scores of 60-53 on all three cards.

Said promoter Tom Loeffler of 360 Promotions about his 21-year-old talented charge, “Going the distance tonight against a far more experienced veteran was a tremendous learning experience for Callum. He was in great shape and was able to show the skill set which we believe validates him as one of the top rising stars in boxing. We’ll be announcing his next fight in October shortly.” Walsh is guided by Hall of Fame trainer Freddie Roach.

In a sensational four-round junior middleweight matchup, Jesus Gonzalez, (5-0, 2 KOs), of Riverside, CA stayed undefeated via split decision over Eduardo Diaz, (7-3, 2 KOs), of Inglewood, CA. Scores were 38-37 twice for Gonzalez and 38-37 for Diaz.

Competing in the super middleweight division, Jordan Panthan, (1-0, 1 KO), had an impressive pro debut with a stoppage over Arturo Manriquez Perez, (2-2-2, 1 KO), with a first-round knockout (1:16).

Stars of the future: UBO double-header in the Philippines Ohan Jr. moves to 16-1 – “The Next Chapter” Bridgewater results