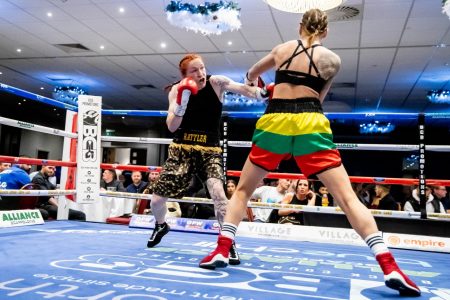 Krissy Shergold insists that becoming the Commonwealth super featherweight champion might only be the beginning of her resurgence.

She gets home advantage when BCB Promotions stage their first show at the Riviera International Centre in Torquay, with fight night set for Friday September 2.

Shergold, who was born and bred in Torbay, goes in for arguably her most major title to date, some 14 years on from when she made her pro debut.

The 41-year-old has held the lesser-known WIBF and GBU world belts, along with challenging for the GBC bauble way back in 2008.

She ripped those straps from Kalliopi Kourouni in July 2018, with both title tests seeing her complete the 10-round distance that the Commonwealth challenge is set for.

Shergold was all set to build on that success over Kourouni, but was struck down by a shoulder injury, not returning to action until December of last year.

A four-round points whitewash against Vaida Masiokaite, by virtue of a 40-36 scoreline, left her storied pro record on seven wins and six losses, from 13 contests.

Shergold didn’t box at all, from March 2012 to April 2018, before making a comeback and beating Bec Connelly, who was dropped in the fourth and last round, on points.

Before taking a back step from the sport, she had been a regular operator, with nine bouts on her slate since her 2008 debut, where she was outpointed by Laura Saperstein.

She got off the mark, at the expense of Lana Cooper, defeating her again in a rematch and also outpointing Angel McKenzie, along with a fourth round TKO over Galina Gyumliyska.

The other defeats on her ledger have come against the likes of Lyndsey Scragg, Delfine Persoon and Eva Wahlstrom, all major world title challengers in their own right.

Shergold said: “This could just be the start of something and I’d be hungry for other titles and stepping up after that. It’s great to be boxing at home, too.

“I’m a Torbay girl through and through, although my boxing and social media platforms say that I come from Exeter. I’m a bit of a tech dinosaur, so I’m not sure what’s happened there!

“I’ve been pretty inactive, for the past four years, but it was good to get out again just before Christmas (8 December 2021, first bout in three years).

“I felt the ring rust and it took me a couple of rounds to find my range, but I got the win and now it’s straight back into a 10-rounder.

“After I fought in 2018 (versus Kalliopi Kourouni), my left shoulder went in training, two months later, and I had surgery on it in 2019. There was a lot more to do than they thought.

“I had my arm in a sling, for six weeks, and a shoulder injury like that is always going to be serious for a boxer. It took a long time to get back, but my shoulder is fine now.

“I’d already hurt my left hand against Bec Connolly (28 April 2018) in the one before that, I hit her with a jab and it overstretched all of the ligaments in my index finger.

“I’m just glad that I’m fit and well again, but it’s getting to the point now where it’s now or never for me. This girl (Vicky Wilkinson) is going to come after me.

“I’ve had it tough, from the start of my career. People think that boxing IQ and intelligence wasn’t there, back then, but it’s just taken a while to progress women on to the main stage.

“I sometimes wonder why I don’t get the call to box on the big TV shows, with all of the experience that I have. I’ve been around for a long time.

“I still feel like I’ve got a lot left to do in this sport and, hopefully, I can get the title and that will open a few doors for me. I’m raring to go.”

Tickets for ‘Rumble on the Riviera’ are available now, priced at £40 standard or £75 VIP ringside with buffet, directly from the boxers or by visiting myfighttickets.com.