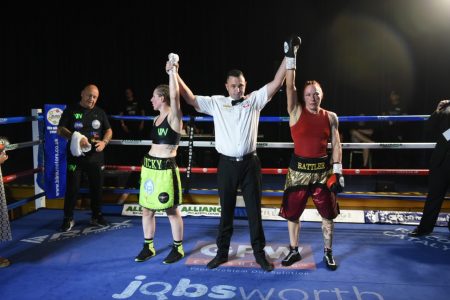 Exeter’s Krissy Shergold and Darlaston’s Vicky Wilkinson went toe to toe for ten rounds. Shergold started the stronger, boxing off the back foot with a solid jab. Wilkinson grew into the fight and improved her output as the rounds went on. The Darlaston fighter came forward as Shergold remained boxing off the backfoot. Judges scored the contest 98-92 Wilkinson and two 95-95 meaning this one was scored a majority draw.

After two fights on the road, Exeter’s Shannon Willey enjoyed some home comforts as he took on Jamaica’s Karlow Wallace. It was the appetiser to the main event and boy, what an appetiser. The pair traded shot after shot for four rounds. Both men gave their all and stood and traded. It was epic stuff.

Exeter’s Mertys Rowen opened his professional account with a 40-36 win over evergreen Melksham macho man, Liam Richards. Rocco was great value as always as he put 31 year-old Rowen through his paces.

Bodmin Moor’s Sam Smith also enjoyed a winning start to life in the paid ranks. The fighting farmer exploded into action against Josh Wale trained Martin Shaw.  Smith rocked the Rotherham man in the opener before Shaw used  his ring nous to slow the debutant down. Smith also settled into his rhythm and closed this one out to match Rowen’s shut out 40-36 win.

Exeter’s James Drummond bounced back from a debut defeat back in June to record a victory in his second outing. The 34 year-old suffered first round KO in Birmingham but credit to Drummond, he was straight back in to take a 39-38 win over Wiltshire’s Paul Cummings.

Whetstone heavyweight Harry Armstrong was back on home turf as he returned to his native Torquay where he splits his time between training. The 29 year-old moved to 5-2 as he defeated Nottingham Lamah Griggs. Armstrong, the bigger and heavier man, was made to work for his win as Griggs kept busy throughout trying to close the distance and work on the inside. It ebbed and flowed but Armstrong got the nod 39-37.