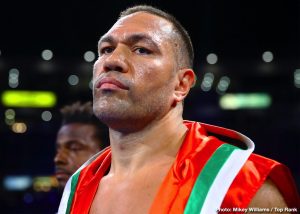 Following from the Kubrat Pulev post yesterday, in a separate interview, Pulev continues on the Anthony Joshua and Tyson Fury heavyweight frustrating situation:

“I stopped training because I was injured and he didn’t believe me, he was a little bit arrogant. He said: ‘if I was Pulev I could box with this injury’, but it’s not so easy. God showed us it’s not good to speak too much and that’s why he is now injured with his leg. I wait patiently and when he is ready and healthy, we can fight,” Pulev said to Betway Insider.

“This is also very arrogant [by Joshua to always talk about Fury]. Talking about Fury because he doesn’t think about my fight, like last time with Ruiz. But life showed him that this is very bad when someone does that. That’s why he will take his second knockout of his life. We will show him and the whole world. I’m now next in line for Fury and I think after AJ, I will fight with Tyson Fury because Joshua is going to lose and he does not think I’m a big problem – but I will show him really new things,” Pulev said.

“It does not matter where it is, I’m ready – it’s just important to win. It doesn’t matter whether it’s on a boat, or in a stadium, in Europe, in the USA, or in Saudi Arabia, it doesn’t matter to me. This will be a win for my country as Bulgaria has never had a heavyweight champion of the world, this win will not only be for me but a win for all people from my country and I want to make them really happy.”