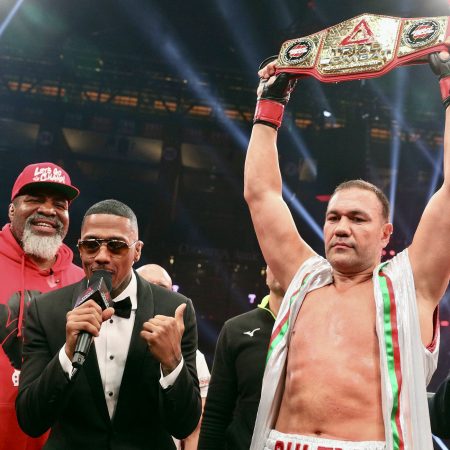 Triller Fight Club has announced that Triad Combat II will take place at the end of February 2022 headlined by a nine-round epic heavyweight clash between Triad Combat I victor Kubrat ‘The Cobra’ Pulev of Sofia, Bulgaria and former UFC Heavyweight World Champion Junior Dos Santos of Salvador, Bahia, Brazil. The event, broadcast on TrillerFightClub.com and FITE will emanate from a venue and date to be announced shortly.

The announcement comes on the heels of the extraordinarily successful Triad Combat debut on Saturday, November 27, 2021 at Globe Life Field in Arlington, TX which included seven outstanding Triad Combat fights and a full concert by musical icons Metallica.

Triad Combat II will be produced by the award-winning Nigel Lythgoe, the Triller Fight Club visionary in addition to the producer and creative force behind “American Idol” and “So You Think You Can Dance.” Exciting musical acts will also be announced in the coming days.

Additional bouts along with ticket information also will be announced shortly.

At Triad Combat I, Kubrat Pulev dominated and stopped Frank Mir at the end of the opening stanza, validating his reputation as one of the toughest and strongest heavyweights in combat sports. Compiling a record of 28-2 with fourteen knockouts over his eleven years as  a professional, Pulev’s only losses came in world championship fights to Wladimir Klitschko and Anthony Joshua.

Training out of the renowned American Top Team in Coconut Grove, FL, Junior Dos Santos is deep in preparations for his first fight in Triad Combat. His professional MMA record of 21-9 with 15 knockouts includes Three ‘Knockout of the Night’ (UFC), Three ‘Fight of the Night’ (UFC), the Longest Winning Streak in UFC Heavyweight Division History (nine), and the Second Most Knockout Wins in Heavyweight History (10).