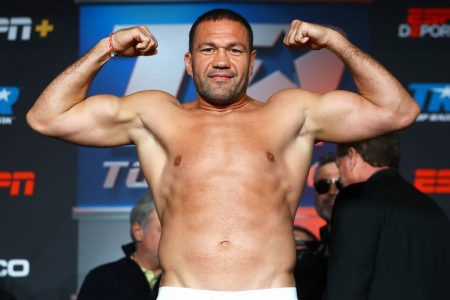 Triller Fight Club and entertainment icon, Nick Cannon, today announced the return to the state of Texas for the combat sports and rock concert mega-event, “Triad Combat II: Kubrat Pulev vs. Junior Dos Santos” emanating from the world renowned Toyota Center in Downtown Houston on Saturday, February 26, 2022, and streaming live on FITE and TrillerFightClub.com. The highly anticipated event can be ordered now through a TrillerVerz subscription for just $2.99 per month or $29.99 per year by clicking HERE. Pre-order the event via the TrillerVerz subscription by Feb. 11 and get a 14-day FREE trial!

Said ‘Rampage’ Jackson after the first event, “Triad Combat is here to stay, I think UFC and Bellator should be worried, honestly.”

Included among the accolades received from the international sports media for the first Triad Combat was a Top Ten Combat Sports Event Award in 2021 from the acclaimed, UK based TalkSport.com outlet. The event was also lauded from numerous media platforms as a true game changer in the sports and entertainment industry.

Triad Combat is a revolutionary, new combat team sport which incorporates boxing and MMA rules in an aggressive, fast-paced manner with the fighters competing in a specially designed triangular ring over two-minute rounds featuring professional boxers competing against professional mixed martial arts fighters. The specific motto of leveling the playing field between the two sports utilizing crossover gloves and with holding allowed is meant to offer boxing and MMA fighters an even battleground where neither opponent has a greater advantage.

Triad Combat II will once again be produced by the award-winning Nigel Lythgoe, the Triller Fight Club visionary in addition to the producer and creative force behind ‘American Idol’ and ‘So You Think You Can Dance’.

Among the bouts on the undercard, the all-action and always, aggressive professional boxer Armin ‘The Bosnian Prince’ Mrkanovic, (10-3, 5 KOs), of Queens, NY clashes with Joe ‘Stitch Em Up’ Schilling, of Los Angeles, CA in a sure-fire bomb away fight over seven rounds in the light heavyweight division. Mrkanovic makes his long-awaited return to battle, last competing on March 31, 2019, stopping Wilmer Mejia in the third round in the Dominican Republic. A veteran of Bellator and Bellator Kickboxing, ‘blood and guts’ warrior, Schilling had won six fights in a row prior to a loss at Bellator 229 to Tony Johnson.

Competing in the featherweight division in a scheduled seven round bout at Triad Combat II, heavy-handed boxer and USBA Junior Welterweight Champion, Samuel ‘The Tsunami’ Teah, (18-4-1, 8 KOs), of Philadelphia, PA faces MMA veteran, Jimmie ‘EL Terror’ Rivera, (23-5), of New Jersey. Teah is returning to action following a devastating first round knockout of Larry Fryers on September 17, 2021. Undefeated over a five-year span in the UFC, Bellator, CFFC and WSOF, Rivera looks to bounce back into the win column after a hard-fought loss to Pedro Munhoz on February 27, 2021 at UFC Fight Night.

Also fighting in the featherweight division over seven rounds, veteran boxer and former Toughman World Champion Dakota Linger, (12-5-3, 8 KOs), of Buckhannon, WV, faces MMA fighter Sam Sicilia, (17-11), of Spokane, WA. Fighting at Madison Square Garden on October 31, 2021, Linger battled to a hotly contested draw against heralded and undefeated prospect Mathew Gonzalez over six rounds. Sicilia fights in Triad Combat for the first time following a third-round knockout of Talon Hoffman on August 26, 2021 at the Conquest of the Cage event in his hometown.

Home of the NBA’s Houston Rockets, the Toyota Center is located in Downtown Houston at 1510 Polk Street. Further information can be found on their website at www.ToyotaCenter.com.