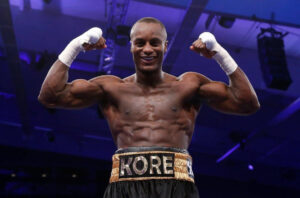 Universum Gym, Hamburg, Germany 19/6/21
Landry Kore has signed a promotional deal with Shapiro Sports & Entertainment, and will make his debut as the co-main event on the Felix Sturm-James Kraft card in Hamburg, Germany, June 19.
Regarded as one of the hottest prospects in European Boxing, Kore (11-0-1 6 KOs) landed the IBO Mediterranean middleweight title with a knockout win over former undefeated Armen Ypremyan at the Versluys Dome in Belgium back in May 2018.
Kore, born in Ivory Coast, recently relocated to Germany to train under the guidance of Dominik Junge, who has trained 2 world champions; Ewa Brodnicka and Raja Amasheh…
“This is a new chapter signing with Shapiro Sports, the 160 pound division is very hot right now in the United States and I know there are going to be opportunities for me,” said Kore. “I want to keep moving up the rankings and improving, I’ve got the capabilities to go all the way. I believe in my own ability and it’s a pleasure to have such a professional team around me.
“I wouldn’t waste anyone’s time if I didn’t believe I could win a world title, this is why I’m here – to win a World Title. There’s no one in my weight category that I fear, I’m ready to fight anyone with the right preparation and notice.
“Landry is a really great prospect with a lot of room to grow. He is now working with an excellent trainer in Dominik Junge, who has produced several world champions, and is really going to be instrumental in his growth. I look forward to moving him fairly quickly up the rankings as he puts everybody on notice at 160 pounds.” – said Shane Shapiro CEO of Shapiro Sports & Entertainment.